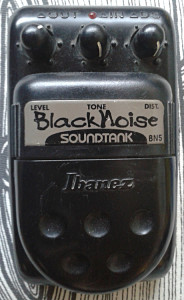 What is it?
Ibanez BN5 Black Noise distortion from later Soundtank series in plastic enclosure. Made in taiwan in mid to late 90’s

The marketing section of Ibanez pedals made this out to be a “industrial” distortion. It’s how the marketing can turn a design to something that it is not – and then people will hate and slander the design for years to come because the marketed sound doesn’t have too much to do with the reality. I could sink this one deep into that category. In the day, the name and marketing suggested that the unit is “Lethal, rough-edged industrial distortion at its most extreme-the sound of a small amp overdriven way past the limits. Our heaviest, most intense, and just plain loudest distortion pedal.” it does sound like marketing jargon that promises to deliver, now doesn’t it? Does the reality support that description? Don’t get me wrong. It has some of that AC15 driven over the limits feel to it. So it’s not all wrong, but still.

I’ve ran into similar issues with other pedals too. The marketing has us believing one thing that the unit does not offer. That can lead to severe disappointments and hurt the brand as much as the individual design in eyes of the users. 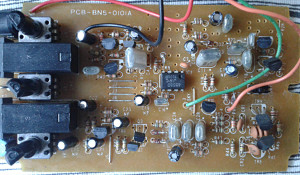 Let’s leave the marketing section behind and focus on the pedal itself. The silk screened label clearly has BN5 on it. Lots of unused holes? And doesn’t the layout look familiar? How about we take a look at the schematic (from Dirk’s archives). Next, take a second to compare it with the SP5 schematic. Topology is the same. The board layout is the same, minus the silk screen labelling. I guess i need to check other pedals from this series to see which ones have the same board layout.

How does it sound?
High gainer that’s not bad at all. Feeling slightly harsher and louder than Slam Punk, but basically hailing from the same neighbourhood. My first impression isn’t placing this to industrial music genre, but to the same lot with TM5, CM5, PL5 and SP5. All are very nice sounding distortion pedals with slight or slightly bigger differences. All of them do sound good. As the Soundtank distortions come, this is one of the really good ones.