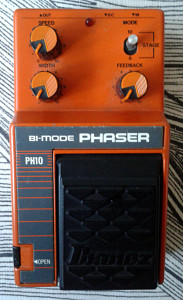 One of the nicest phasers. The Bi-Mode here means that the phasing stages are switchable between six and ten stages. Which is not a bad idea to throw in to a huge bowl of phasers. Got this unit for a reasonable price from J. Linden of Linden guitars. As i tried it out, i felt like the six stage mode was losing the phase from most of the sweep. That could only mean one thing. The unit had went misbiased over time. I’ve seen this happen with new units too, so it’s not that uncommon. Biasing the JFETs with the trimmer is a bit of pain on this one, but i think i nailed in the first 5 minutes or so. So all i needed to get this unit running properly was a screwdriver and a hint of patience. 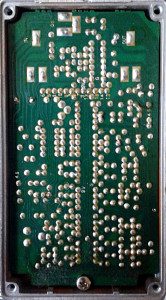 As most of you may already know, i’m a sucker for symmetry on the board layouts. The idea of placing all six ICs in a single row is a heart warming visual candy.

As for the design.. As the photo below shows, there are six JFETs responsible for the phasing. So how does it become 10-stage phaser just by a flick of the switch? The design sort of re-uses the first four stages in the 10-stage mode. Quite an elegant solution. You should be able to find the factory schematic PDF through your favourite search engine. I’m not linking it here.. 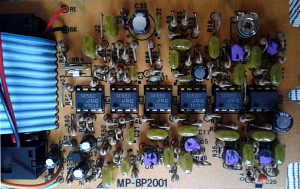 The feedback control takes the signal from output filter and pushes it back to the beginning of the phasing stages through the one half of a dual opamp which is there, just to drive the feedback. This is very nice feature as well. I’ve seen this type of feedback network used a lot on different flanger designs, but not in many phasers.

So. In general this is pretty versatile and neatly designed phaser. Definitely more usable than the standard and overly cloned Phase 45, 90 or 100.

How does it sound?
Like a good phaser tool with lots of versatility on the controls. On six stage setting it is not that far away from Phase 100, but the feedback control lets you tweak this to a lot thicker and much more psychedelic swirls. Now if we take the ten stage setting, the sweeps and swirls get even more depth and psych on. The slow ambient sweeping on both, 6 and 10 stage settings are really good sounding and usable too. Once again, the feedback control takes the trophy home. Very good phaser.