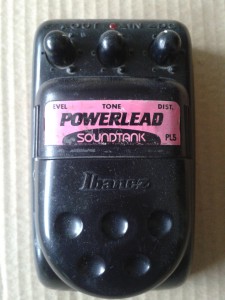 What is it?
Ibanez PL5 Powerlead from Soundtank series in a plastic enclosure. Made in taiwan around 1993.

I also have another one of these, build around 1996, in mint condition and in its original cardboard box. The whole series doesn’t disappoint much in terms of dirtbox quality. Most of them sound just right, but there are couple exceptions. This being one of them. Apparently the Powerlead was the second most sold design of all Soundtanks – only falling behind TS5 sales. Amounts originally sold make this very common design, so anyone should be able to score one for cheap. Is it worth it? I can’t be certain about that. But it is definitely not the worst dirt box in the series. Schematic is available online. 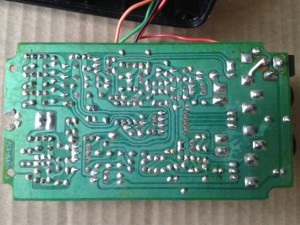 Looking at the schematic, there’s your standard Ibanez buffering and electronic switching, which passes the signal to single transistor gain stage. After this, the main gain stage is basically a YAR with it’s hard clipping diodes and couple of the component values reworked. The tone control after the YAR is not you standard passive treble cutter, but tri-gyrator to tweak the frequencies that get passed forward. Lastly there is quite standard volume control that mixes the signal passage between Vref voltage (virtual ground) and the output buffering. 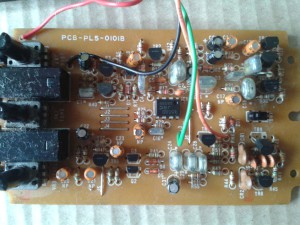 It is equipped with JRC4558D, and there are some things that can improve the performance. Swapping couple of components is on my to-do list and i’m committed to mod this particular unit once i get to it. Tweaking the first, discrete gain stage to push the main gain stage more is where i’ll begin. Then swapping the 220R resistor for 22K to bring out more gain of the main stage. The two paths to ground from non-inverting input should be tweaked too. Lastly the clipper diodes could be swapped for LEDs or even two pairs to push it slightly further. It may need some other swaps too, but we’ll see about those once i open it up on my bench again.

How does it sound?
Not great. At first the tone control feels to be working wrong. It basically adds low frequencies when turned clockwise. Overall tone is big and distorted, but still it doesn’t thrill me. Name says it all. It offers powerful lead tone that’s not completely unlike the classic hair metal guitar solos of the early nineties. Not great, but not too bad either. Definitely next from worst of the original six pack, right after Modern Fusion.