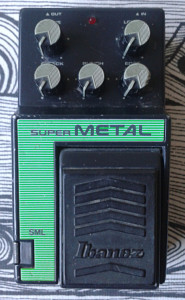 What is it?
Ibanez SML Super Metal from Master Series. Made in japan mid 80’s.

I wasn’t planning to go after the Master series due to the rocket prices. Of course i have been interested in these too, but the status and rarity ridden cost of collecting these made the series not too pleasing. For that same reason i won’t be collecting any of the older Ibanezes with the same enthusiasm as the later ones. To pay over 200 euros for used and beaten unit just doesn’t suit me. Of course i’ll keep my eye out for any of the pre-7 series Ibanez pedal that surfaces. But. If the price and condition are right, i might go for it.

This unit came to me in a deal with pink DE7 and the total price was good, so i really had no choice. The unit was basically broken with burnt and removed polarity protection diode, out and DC jacks were disconnected and solder joints broken. And the level pot had some dead areas on the sweep. The outside condition is good as the image shows. Just couple of paint chips and mild worn. The jacks were easy to reattach by just reflowing the solder. Cleaning the level pot didn’t help enough, but i thought i’d leave it as it is and not start to hunt down a new pot. 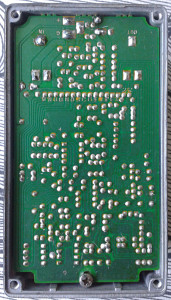 Standard and neat looking board. basically the biggest differences between the L and 10 series are the pots. in fact, this design is believed to be exactly the same circuit as older SM9 Super Metal. Lots of gain stages and clippers. And lots of control over the characteristics. Level shouldn’t need much explaining (other than it needs to be maxed to get even near to unity levels), Drive and Attack control the amount and character of the distortion. Punch and Edge take care of the EQ. These controls are very usable and have a drastic effect on the sound. 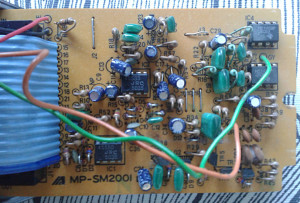 The unit is sharing the board with later SM10 Metal Charger, which makes the two identical. Even though the unity level problem is apparent on all three designs (SM9, SML and MS10), the popularity can be explained without an issue.

Update! I recently got another one of these. At fist glance, both seemed and sounded quite identical. Until i noticed the silk screened labels on top of the boxes. The unit pictured above has a lot higher serial number (about 10x higher) and the labels are grey. On the other unit, the labels are printed in green and the label sticker has clearly different tint of neon green on it. All this suggests that there are at least two separate production runs of SML in existence.

How does it sound?
This being the reason for the popularity. The sound. In vast ocean of distortion pedals, this unit still has some personality and edge that most other simply don’t have. I’m liking the sound even though it has a serious flaw with the output level. And it’s a good thing i got this. I modded my SM10 for more level and i was left with mixed feelings. It is definitely more usable with mods (as this would be too), but there’s still something in the original sound that i want to keep. This probably ain’t the best metal distortion there is, but it’s very good either way.