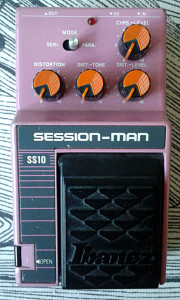 What is it?
Ibanez SS10 Session-Man Distortion/Chorus from Power series. Made in japan between 1986-89.

Mid 80’s was a perfect time to try out stupid things like to combine distortion with other type of effects in small pedal enclosures. DOD did it, Boss did it and of course, Ibanez did it. The idea of mixing distortion with chorus seemed like something that i wanted to try out. The great thing with the Session Man is that there’s a switch that places the chorus in parallel or in series with the distortion to create different soundscapes. The bottom knobs control the distortion with standard parameters (level, tone, gain) and the upper knob determines the level of chorus mixed with the distortion. The chorus doesn’t have any controls, other than the mixer level. Sure, there are trimmers for those parameters inside, but it is basically fixed to one depth and one speed. 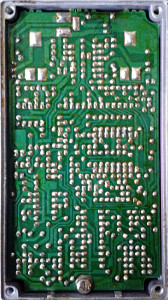 For all analog distortion and chorus delay circuitry, the board looks like it’s well used space. Turning the board around reveals crowded and crammed circuit with a lot of components. The yellow trimmers are for tweaking the chorus. I couldn’t find a schematic to see everything there’s going on. 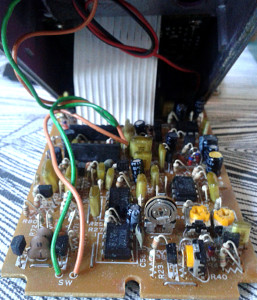 From these crappy photos and being inside my unit, i can tell that there’s a BBD pair handling the choruses timed delay, one opamp acting as LFO ans SIP opamp driving the distortion. The SIP may be a good choice, since  there’s a lot of stuff going on on the board.

These seem to be somewhat collectible units. As a niche novelty items, i think the value is correct. But as a usable, unique sounding guitar effects? Not so sure.

How does it sound?
First of all, the distortion isn’t too bad. Quite open and dynamic, without the flattening compression that most distortions offer. Now, when we engage the chorus in parallel, i’m like “why?” The chorus is so mild that it hardly does anything, even when maxed. Anything good that is. The chorus is a lot more overwhelming in series mode, but still. Why? The parallel setting is a thing of its own, but if i wanted to chain a chorus and a distortion after each other in a studio environment, my choice would not be SS10. For a live setup maybe. But even then i’d rather use a utility box to engage both with a single stomp.

These combination pedals are nice curiosities. As these come, the SS10 isn’t the worst of them by far. It could even serve a purpose on some situation.