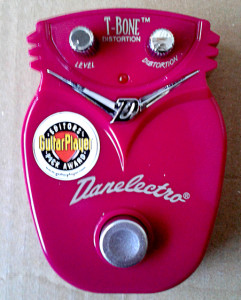 What is it?
Danelectro DJ-2 T-Bone Distortion from Dano mini series in tiny plastic enclosure. Made in china around 2007 (dating based on a guess).

As i got accustomed to praising the mini series boxes, i thought it was a nice deal to take this home from local music shop as a new unit. Price was pretty much the same as the shop had paid for the unit when they bought it in – a.k.a. cheap. I couldn’t find a schematic for the circuit, so one of my thoughts was to rip it immediately open and see if it was just a simple Dist+/250 adaptation with standard Dano electronic switching. Taking the bottom plate off showed me the in/out board. Minis can be split into two categories when it comes to build quality. First is neat and well soldered. This category usually applies to the units with through-hole components (not always). And the second. The ones that were build on the first day of work after drinking for two weeks on chinese new year. This unit. Sinks definitely to the latter category. 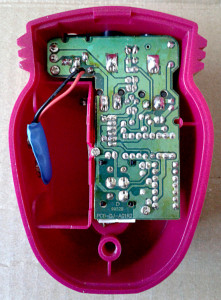 But i continued with the same profound enthusiasm that i usually have for the unexplored units. Taking the in/out board out made me want to put the little bastard back together as fast as possible. So there’s a 14 pin SOP quad opamp on two-sided, horribly made board that mixes SMD and through-hole components together. At this point i just reassembled the thing. I simply don’t want to know more about it. 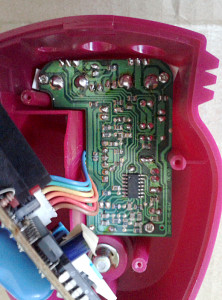 So. For those who have been following my puny blog, even though i may have sounded like it in the past – not all mini series effects are worth the trouble, money or anything else. This unit proves the point. It is probably the suckiest unit in the whole series. The sound and feel of DJ-1 Pastrami mini overdrive did let me have faith on this one too. Faith misplaced so far that a shovel won’t be enough to unground it.

How does it sound?
Like an unwanted, disfigured son of MXR Distortion III and Morley Just Distortion. Yes. Both of the mentioned are really bad sounding designs, so you can only imagine what this sounds like. Bad mid-honk, broken sounding clippers and thin overall feel. As a positive side, the  output level is sufficient for a distortion unit. But no. I have nothing good to say about this. Nor will i even think about tracing and fixing the design flaws on this one. Reason – it will most likely not be worth it. Anyone with an internet connection should be able to find hundreds of schematics that can be tweaked to perfection. At the moment, this doesn’t even wake up the explorer and tweaker in me.

So i put the plastic bag back on and stuff the thing back inside the cardboard box. Let’s see if it sounds better after getting ten or more years of cupboard treatment. I’m certain that the treatment has worked on many designs before. So there is a tiny, remote chance that it could work here too.