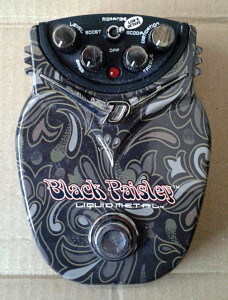 What is it?
Danelectro LM-1 Black Paisley Liquid Metal distortion with optional down octave. Made in china around early to mid 00s.

Danelectro is a fun and sometimes quite surprising brand that truly appeals to me. For some reason i’m sort of an sucker for those floral patterns, so the graphics on the pedal have their own piece. of attraction as well. Where some of the Danelectro units are meh, kinda ok or well designed (or sometimes just redesigned), there are some that really blow my mind. This unit is one of those. In addition to very successful graphic design, just take a look of the photo below. Check the placement of the SMD resistors and caps. symmetry is astounding. No schematic around. I think that this is not a prime suspect for tracing due to heavy component count and pretty complex overall design. After all, it is a super high gain distortion with good EQ controls and an added flip-flop based down octave. 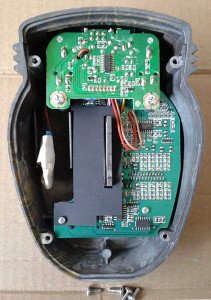 All the controls deliver what they promise. To begin with, there’s your volume pot, in addition to distortion and two band EQ with separate controls for bass and treble. Next, there’s the mids control on a switch that goes from flat mids to scooped to boosted. Lastly there’s a down octave slide switch between the jacks. All the controls work well and offer quite a large palette of tweakability.

The sound has its own character when it comes to distortion. Down octave feels quite wild, even though this doesn’t get even close to overwhelming DOD Buzzbox kind of wild. The personality in the sound reminds me easily of many classic metal distortions, like Boss HM-2 and MT-2. Boosted mids on this one are probably a game saver for many HM-2 fans. Output level is sufficient and the EQ plus the mids switch offer a lot of versatility for overall tone. Very versatile and still it manages to have a personality. Very recommended Danelectro unit, and not just for down octave enthusiasts.