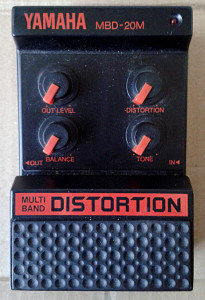 What is it?
Yamaha MBD-20M Multiband Distortion. Made in japan around mid 80’s.

Got this unit from a guitar guru J. Lindén some months ago. He was selling the unit for a very decent price and i almost did let it go. We were at some gig back then and he said to me that “you’re stupid if you don’t take it”. So i did. Reason i wasn’t too interested on the unit at first was the non-uniform size of the pedal. I do dig those Yamaha 10MII-series pedals quite a lot, but this one has a lot wider footprint than the other pedals in the series. But am i glad i got it? Yes. 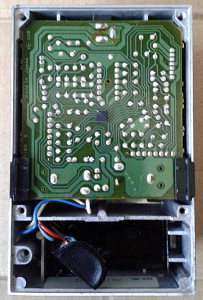 As most of the 80’s japanese pedals, there is nothing negative i can say about the design or the board. As usual with the Yamaha pedals, the quality of soldering and box design is very nice to say at least. I couldn’t find a schematic for the circuit, but There is some information about the box on Effectsfreak.com. Apparently, the design has two separate distortions on board. One distorting the lower frequencies and the other for highs. There are two Panasonic AN6555 low noise dual op-amps to give out the gain. 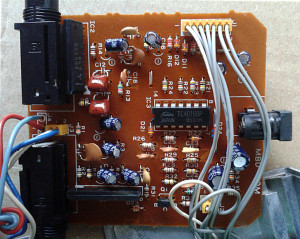 The circuit is spread on two separate boards. One for main switching and the other for the controls and a bit more.. The controls are your average distortion box controls, “Out Level”, “Distortion” and “Tone”. With addition of “Balance” which mixes the low and high distortion bands together. There are obious reasons for why the world needs a distortion with blended bands. First of all the low and high frequecies clip differently. So pushing all of the audible 20Hz – 20KHz frequencies through the harmonic clipping diodes witll result in some parts of the range clipping better the others. This is highly affected by the types of diodes used. 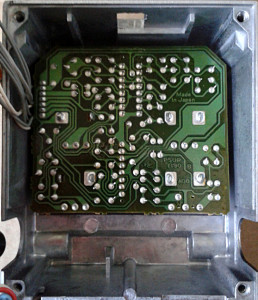 Even thought the idea of multiband clipping/distortion isn’t offering a huge wow factor, it is still quite ingenious. And of all the pedals i’ve dealt with – this is rather unique method of controlling how the distortion affects the guitar’s signal. Should it be unique? I think not. It is a very good idea and it probably should be used more on the boutique world.

How does it sound?
At first the feeling on the sound is quite baffling. Only thing i count as a plus is the definition and clarity. But more i play with the box the more it gives out. Level, Dist and Tone controls are your standard bread, offering nothing too interesting. Just sufficient output level and and good range on the Tone. The distortion control goes from high gain distortion to higher gain distortion and i wouldn’t call the minimum setting an overdrive anytime soon.

Then we come to the Balance control. From muddy low band distortion to clear, open wide band distortion to cutting high mids/high distortion. Versatility is enough for many purposes from sort of emulating JCM800 driven over limits for rhythm parts and the screeching high gain lead sounds that are able to cut temepered glass.

It does sound good.