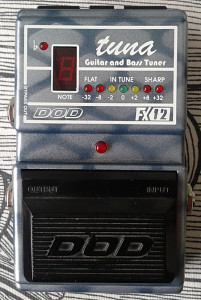 What is it?
DOD FX12 Tuna. Guitar and bass tuner pedal. Made in USA around 1996-98. The enclosure is in line with the last US made series and the original box doesn’t have “made is USA” printed on it. There is no chinese made “V” version in existence. I’m thinking that the box was designed without “made in” notion, because it was planned to continue manufacturing FX12 in china with other VFX models.

DOD Tuna is one of the first pedal tuners to hit the stores in 90’s. The idea and purpose is there, but the reason why these units were basically butchered in sales when compared to Boss TU-2 is clear. It is a bad tuner. Collectible? Maybe, but a useful tuner? No. Also, that may be the reason why this design never made it to the chinese mass production in the end of 90’s. The fishnet paint is cool. 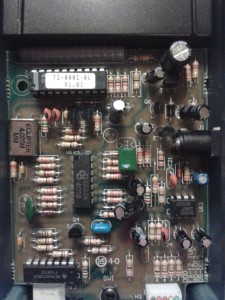 The guts seem well made and the aesthetics of the whole pedal are nice. It’ s not bad looking box at all. But sadly, all the good things end there.

How does it sound?
It’s a tuner so it doesn’t exactly sound like anything. It’s not even supposed to. It’s supposed to show you the frequency and note on the LEDs. It does that. Sort of. When i tried to tune my guitar with this unit, it showed every string to be in tune. When i strummed a chord.. No. Annoying little thing. I’m keeping this as a collectible novelty and a historical item. But to use it? One needs to be completely insane to even think about using this on his or her board. It is crap.