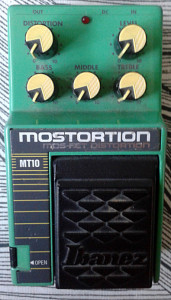 What is it?
Ibanez MT10 Mostortion MOS-FET Distortion from Power series. Made in Japan, late 80’s.

As the Ibanez Power series pedals come, there aren’t that many original designs that have risen into cult status and are priced as such on the used pedal market. The MT10 Mostortion is one of those, filling this void with OT10 Octaver. Both of these are sort of one offs in the Ibanez back catalog. Where the OT10 is the only Octave effect from Ibanez, the MT10 is the only MOSFET (metal oxide semiconductor field effect transistor) based overdrive/distortion and it has three band EQ as well. I try to think of other Ibanez driver pedals with Bass/Mids/Treble controls.. Nothing comes to mind (ok, the Tubeking distortion etc. but let’s just say that three band EQs are not a standard Ibanez way of doing things). Saw this unit for sale with a reasonable price and i just couldn’t let it go. 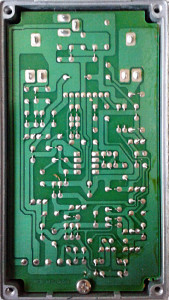 There’s some visual magic going on with the traces. Normally i would dismiss traces like this with a snarky “meh” comment, but not this time. Maybe it’s just how all the components are distributed nice and even all across the board, instead of super-engineering the left upper corner  and leave everything else blank. The schematic is up at ToneHome, and it shows how the EQ is made. Pretty cool to see something of a standard three band EQ drawn like that. Base topology is a buffer -> clipping amp -> three band EQ -> EQ recovery amp and an output buffer. Quite standard, but still something we won’t run into everyday. 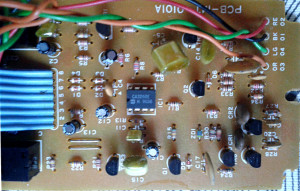 It’s the opamp that makes this a MOSFET desing. Harris CA3260 to be exact. This obsolete amplifier may be the biggest reason why this design doesn’t have reissues and the number of available clones is low too. This, at least in part, would also explain the prices these currently sell for.

How does it sound?
The sound is definitely one of the factors affecting the prices. From slight, cool boosting overdrive to harsh and cold metallic distortion. Way more versatile than the first modern box i would compare this to – the ZVex Distortron. Overall tone also reminds me of a Marshall MOSFET 100 Lead head’s distortion channel. There’s this MOS signature sound going on that some people just love. It does have a face and sound of its own. Which is only a very good thing. I don’t think we really need that many more TS sounding boxes in the world. Besides. This simply rocks.