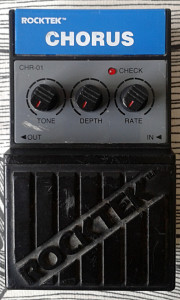 What is it?
Rocktek CHR-1 Chorus. Made in china around early to mid 90’s. Housed in brittle, all plastic enclosure.

Noticed a lot of two Rocktek pedals, listed as broken on eBay. First one was this one and the second was the Metal Worker distortion. Sniped the lot for decent price and waited with enthusiasm to get the units on my bench. I’ll write another post on the Metal Worker later, so we can focus on chorus on this one. I do enjoy sharing these straight-forward repair reports…

So the unit was completely dead. First, i took it completely apart and noticed two faults that looked a lot like the unit had taken a quick flight and stopped suddenly at a wall. With all the cables attached. The input jack had been totally shattered and the DC jack was torn off from the solder joints, taking an important chunk of the ground strip with it. Basically, a new board mounted input jack, new joints for the DJ jack and a crude, almost brutal fix for the broken ground strip. That was it. The circuit was running like me, ten years ago. Fix was pretty simple and i happened to have suitable parts at hand. 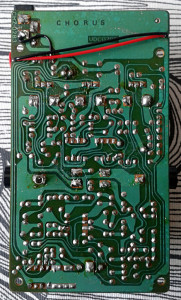 Effect offered other surprises. I’m not sure where the design is ripped off, but the board design is looking a lot like ten year older japanese designs. The design itself is a standard MN3102/MN3207 chorus with LM358 acting as an LFO and a JRC4558D as a mixer amp. Very good looking board and nice analog chorus design. True. There isn’t that much in there to be throwing wow factor around, but overall design does keep all the mehs away. 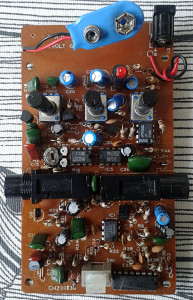 Electronic switching and all the things around it will keep this unit far away from most desired old pedals. Sucky, not too well designed buffering won’t response to people who require modern pedal standards. I do find this one interesting.

How does it sound?
Very nice and usable. Soft analog chorus with reasonable control range. There’s nothing special about the sound, but overall feel is pretty close to all the other unit from 80’s and 90’s with same choice of BBDs. The MN3102/MN3207 has a nice, clear, yet personal chorus sound. Well worth getting this unit, even though it won’t be a prime suspect for your board. These seem to be selling cheap, so for an good sounding analog chorus for your recording needs, this may be a very good choice.