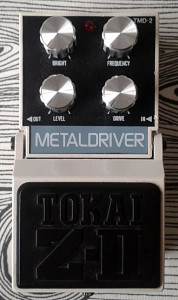 What is it?
Tokai TMD-2 Metaldriver from Tokai Z-II Super Effects series. Made in japan somewhere around early to mid 80s.

Saw this on sale and couldn’t let the guy rest until we had a reasonable deal on the unit. I’ve been into pedals for a few years at the time of writing this, but i had never before ran into Tokai branded pedals. Which of course piqued my interest right away. For some reason these units do not seem to be hot, or they may be too hot. Very few units are available through usual internet auctions. As most of the items from the 80s with labels “Tokai” and “Japan” are instant collectibles with hefty price tags, the effect pedals by Tokai Gakki seem to sell for cheap – at least if you happen to find one for sale.

Now, first thing i noticed was that the knobs have been replaced. Wouldn’t have noticed it if it weren’t for Effectsdatabase. As the knobs are simple push-on type that tend to become loose with sunken 15mm T18 shafts, my guess is that one of the originals went missing at some point and one of the previous owners simply replaced the knobs with something that simply fits. It’s not that bad and i can live with the “error”. Next up, the Tokai Z-II series logo on the stomp lid’s rubber… Wow. Man. I mean Wow. Instant flashbacks from playing Ikari Warriors and Operation Wolf back in 1989. With all the rest about the outer shell correct, my hopes for the unit kept rising. 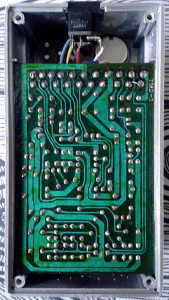 Under the bottom plate, there’s a 30 year old piece of cardboard acting as an insulator between the bottom plate and the board. The board being thick, strong and hand designed. Exactly like most of the japanese units from that era. The reason why so many of the units from that era are praised. Looking at the components give out some details, like Sharp 94558 opamp (which i’m guessing is a Sharp’s make of the JRC4558), standard signal diodes in clipping formation and a few FETs for buffers. Looking at the pots, the overall design brings Pearl OD-5 to mind. One of the pots is a dual gang, which acts as a giveaway. The controls for Level and Drive are self-explanatory. The Bright controls acts as your standard tone control with opening the high end when turned clockwise. The Frequency control is a powerful EQ control that cuts the bass on CW and treble on the CCW. I’ll leave the technical design at rest for the moment. I’m sure i’ll revisit the board with a magnifying glass at some point… 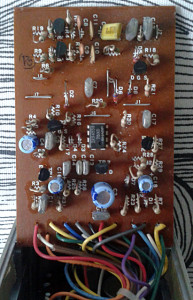 On the outside, the enclosure has a lot in common with Boss housings. But once the box is opened, the harsh reality unfolds. It is in fact a thin aluminum enclosure. Thinner than Bosses. I don’t see any reason why this shouldn’t be able to take a few years on the road, but it is still a lot weaker housing than many other boxes of the era. I must say that near par enclosure design is the weakest link in this unit. So it can’t be all bad?

How does it sound?
And it isn’t. Soundwise it is somewhat close to Pearl OD-5. Without doing any footwork on the design, i strongly suspect that it is in fact a Pearl OD-5 with a marketing twist. Does it sound like a decent and usable overdrive? Yes it most certainly does. With gain maxed, level at 12 o’clock, bright at near max and frequency at the middle it sounds very, very good overdrive. Where as thrashers tend to love old TS9s in front of Marshall JCM800s, this, in my opinion, should serve a lot better in that situation. The controls let you even get decent mild, bluesy overdrive tones out of it. Versatile overdrive box with good EQ/Tone controls. Now does it instantly give out the “Metal” sound? No. It doesn’t. But it is still a very good sounding unit.