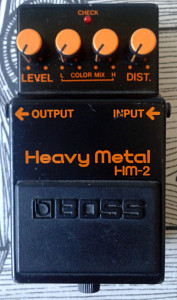 What is it?
Boss HM-2 Heavy Metal distortion. Made in taiwan, early 1988. It has six number serial with leading zero, so that makes the unit one of the very first taiwan made HM-2s

If you have not heard anything about this distortion, you must have been living under a rock. It is one of the most desired Boss pedals ever, mainly due to swedish death metal frenzy back in the 90’s. The classic Daniel Ekeroth youtube video clip tells you everything you need to know about it. Due to it being in production from 1983 to 1991, the numbers are limited. There’s still plenty of them around, but since many death metal players try to get their hands on every single unit that they come across, the collectibility of these units is high. And the fact remains, it is the only pedal out there that gives you the authentic swedish death metal sound. Daniel is right about Metal Zone having nothing on this. They are very different designs. According to Effectsfreak, these should usually sell for less than $100, but i’ve seen units in good condition sell for a lot more. Well. It’s been over 20 years since Boss stopped making these, so some of the units must be dead and gone, others in use and some of them are in the hands of collectors. I smell prices rising r in the future. 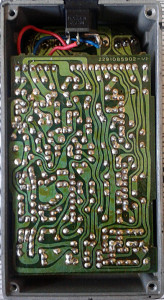 Board is looking very appealing for a Boss design. Acidy styled strips with a crowded board always induce goose pumps. Apparently the board design has remained exactly the same when manufacturing moved from japan to taiwan.  If we take a look at the schematic (courtesy of hobby-hour.com), we see the distortion section after the input buffering/switching network to be quite unusual. Notice how the distortion control is wired – on the CCW end of the sweep it has maximum resistance between inverting input of the asymmetric clipping amp and ground (a similar method we’ll find on OD250/Dist+ gain control). While it’s doing that, it also tames the NPN/PNP transistor network that acts a pregain circuit. Once turned CW, the pregain has more effect – while the clipping amp is pushed to it’s potential. Ingeniously simple. After the asymmetric clipping amp we have two clipper pairs before there’s a buffer. After that buffer is the section which makes this a HM-2. 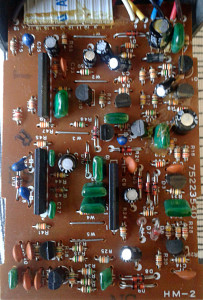 I bet the designer thought that simple clipping amp and the clippers after it weren’t enough for a design they were about to call Heavy Metal. Overall sound is fairly deformed at this point. The key ingredient is here – the three band active, Q boosting gyrator filters that offer up a big amount of boost for their selected frequencies. Low band is there to give out crushing lows and the upper two are controlled by Color Mix High control. This boosts mids and highs.

After that there’s a recovery stage, followed by standard level control and output switching/buffering. Rather complicated design, but successful in more ways than one. The gyrators mimicking EQ boosts are a thing of their own, but the pregain stage described above looks even more interesting.

On the negative side? Noticed the 330R resistor and D1 diode on the schem? Yup. This unit is meant to be used with idiotic Boss ACA power supply. Diode and resistor drop the unregulated 12V DC from ACA supplies to ~9V-ish. This unit cannot be used with standard regulated 9V supply. Or it can, but then you’ll need to daisy chain it with other pedals to counteract the effect of those components. If you are to try one with modern, standard pedal power supply, you’ll find the LED to light up dim and the sound being quiet octave up distortion. I know many people who have thought their units are broken due to this feature…

How does it sound?
Like swedish death metal from the 90’s. It is definitely not an overdrive, so don’t be surprised when you can’t get that bluesy tone out of it. It is a Heavy Metal distortion and very good one in what it does. The clipped frequencies stay consistent and the distortion is overwhelming and crushing – yet still defined. Color Mix is effective pair of controls, and with these the tone can be tweaked to match your guitar and your favourite frequencies. I still think you’ll want to max all the controls and learn a Entombed riff or two. I don’t blame you.

Here’s a quote from original marketing material: “Also, the HM-2 can be effectively used even with a single coil pickup guitar with low output level, because of its high gain.” – No disputing that.

Some of you know that i like MD-2 Mega Distortion a lot. This one could be considered as MD-2’s ancestor witth HM-3 Hyper metal on the on the same linear line of evolution. That would be a lot closer analogy than bringing MT-2 in to this equation. Super high gain usability. There’s a lot of crushing for this circuit to do yet.