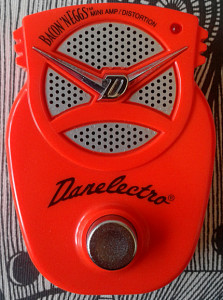 What is it?
Danelectro DJ-16 Bacon ‘n’ Eggs Mini Amp/Distortion from Dano Mini series. Made in china around mid-00’s.

This was difinitely one of the Danelectro units that i didn’t have much interest towards. But as collector, i didn’t have much choice but to get one. This unit i got cheap from the local music store. It was cheap to begin with, but the personnel at the store had misplaced the original cardboard box, so i got it even cheaper. First thing that occured to me was that this could probably be used with the pedalboard meant for the series as a last unit. That way one could have a tuner, three effects and an amp in one easily carried box. Yeah. I know. The tuners suck, but still that could be something fun. Tried this out at home and noticed a few things that piqued my interest. 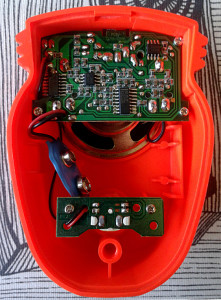 First of all, the unit acts as an amp when there is no cable at the output jack. Second, the amplification is done with single chip and with amplifaction on, one can’t turn off the distortion. That is a lot of SMD connections on a board that small. The bypass works when output cable is attached, so part of the circuit must be for that too.

As an practice amp? No way. Strange bird of all the effect pedals? Yes. Strange thing to be in existence.

As an amplifier – horrible. 9V supply is doing everything it can to provide something like 2 watts of sheer power, which is then pushed on to a two inch speaker. The resultin “tone” is harsh, loud, cold and about a hundred worse adjectives. But. When used as a distorion effect pedal and the amp feature disabled, it’s not bad at all. Should it be used on your rig to give distortion? You might want to try it out, but my guess would still be no. In general, the distortion sound and feel is quite close to a control-less, maxed out MXR Dist+ with some peorsonal character in it. Not bad. Still a bit strange thing to be using in any setup.