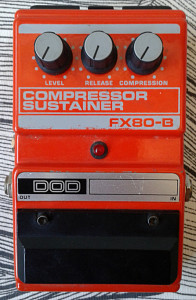 What is it?
DOD FX80-B Compressor Sustainer from XF-series. Made in USA in 1988.

This pedal had been on my want list for quite some time. The biggest reason for simply not buying it was that these units sell for ridiculous prices here where i live. The one man (wikipedia link in finnish), who is deservedly considered as finnish guitar god used one, so it is in everyone’s interest to ask for way too much for these units. No matter what the condition they are in. For me, the idea of paying what these usually go for wasn’t too appealing. So i was looking for one on ebay and found this unit as broken one. Since the battery door was in tact and the pictures showed an unit that was in good condition, i snatched it for about the half of the money what people usually ask for these here. On the item description it said only that the dc-jack was missing, but the unit was in perfect shape otherwise – and it was working with a battery. Once the unit arrived i checked if the DC jack was missing or what was the problem. There wasn’t any. Only thing missing was the nut ot the jack. The jack itself was inside the box, still wired and in working order. Went through my box of crud and found a nut that fit. So, with basically zero repairing work, i got myself a “Pulliaiskompura” for a very nice price. 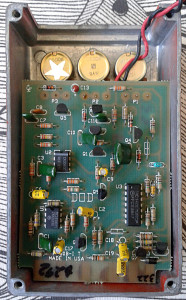 As always, there are nice collection of information about the unit at America’s Pedal. And here’s a original factory schematic of the earlier model with middle pot labeled “Attack”. The circuit is more or less the same on earlier and later versions. Either way, it shares a lot in design with original MXR Dyna Comp, including CA3080 OTA on board. 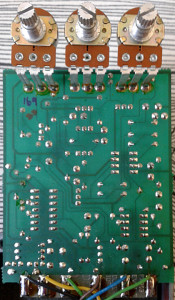 Board design and everything else is pretty much the same with all the other FX serie pedals from the era. A battery door that can easily be misplaced (Someone should make a batch of these doors as a spare parts – there could be some real money in that. Hell, i’d buy 5 immideately.) and the DC jack takes only 3,5mm positive tip supplies. Standard DOD flip-flop bypass and so on.

Edit! I studied the two available schematics a bit further. While the circuits have similarities, i think it’s worth noting that version with “Attack” control is based on CA3094 OTA, while the later one with “Release” control is based on CA3080. This means that there are distinct differences between the circuits and the latter version is somewhat closer to other OTA-based compressors around than the former. Haven’t had a pleasure to compare the two side by side, so i can’t be sure how big of a difference these changes are. Schematic for the unit above can be viewed here.

How does it sound?
For the later, “Release” version – Soft, transparent compression that one easily forgets that it’s engaged. The difference kicks in once it’s turned off. In my personal opinion, the sound is definitely one of the best for a OTA-based compressor i’ve played with. So the reputation isn’t false. Where as most of the CA3080-based compressors feel mushy and noisy, this one keeps the excess hisses mostly away. Sure, it doesn’t sound nearly as good as optical compressors, but for OTA-based – this is the king.