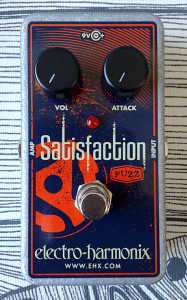 What is it?
Electro Harmonix Satisfaction Fuzz from Nano series. Made in USA in early 2014.

Noticed this unit’s release on the web and it seemed quite promising. Seems like the idea behind the design was to recreate that well know fuzz sound from one well known Rolling Stones track. According to the stompbox historians, the unit used on the original track was in fact one of the early Maestro Fuzz Tones. Solid idea to recreate that sound. These unit sell for cheap as new, so there wasn’t much choice for me but to get one. Of course i teared it right open as soon as it landed on my desk. 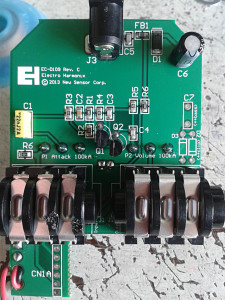 Modern EHX design. No surprises there. Super dull and extremely boring design. But wait a minute! What are those empty pads just above the input jack? C7 and D2-D3. Print next to those holes say <++clip> and <++bass>. Now that’s something you don’t see everyday. As there are no hidden components on the other side of the board, i thought this should be easy enough to trace. So i did. Does that look familiar to you? 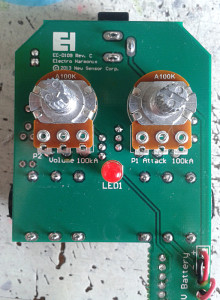 Yes. That is, in terms of topology, pretty much 1:1 with good old Jordan Bosstone fuzz with NPN/PNP pair as the main attraction. Design here has nothing to do with Maestro Fuzz Tone. Only a few cap value changes to Bosstone and voilá, there’s your new design. Smaller values for input and output caps, plus missing diode clipping at the output are the main differences, but EHX has cleverly left us with six empty pads and clear instructions what to do. Upping the output cap for 22n (10n and 12n in parallel) and adding two silicon signal diodes for clippers makes this so close to the Bosstone that it makes this unit very, very interesting. I think this would be the greatest and cheapest way to get yourself a Bosstone. Buy yourself a cheap EHX fuzz and add one cap and two diodes.

I’ve heard stories about some synthesizer makers leaving empty pads for user to try mods on. But i’ve never before seen this behavior in guitar effects before. I do hope this is something that we may see again in the future, maybe even from other manufacturers too. This does make EHX look better in my eyes…

For my own unit, i tried on the clippers, but decided to leave them out. I did place a 22n cap for C7. Now it isn’t exactly EHX Satisfaction nor Bosstone. (Maybe i should try it with only added diodes, but no cap at some point..)But it is something useful. And to be frank, it is cool.

How does it sound?
Out of the box – not so super. It has some qualities that could be reminding some of us of that desired Satisfaction tone. Thin, loudish, but not mushy enough fuzz. With output cap value increased – wow. Added body and mush. Think of mushroom clouds viewed through a kaleidoscope. Yup. It sounds like that. Fat, massive, loud and devastating fuzz. With both, clippers and cap added, it sound pretty much exactly like all the demos of original Bosstone i’ve heard. (Yup, i haven’t had a pleasure of playing with the original Bosstone unit. At least not yet.) Overall. Satisfaction Fuzz sounds good and it is definitely worth the money.