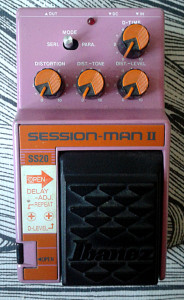 What is it?
Ibanez SS20 Session Man II Distortion/Delay multi-effect from Power series. Made in japan in mid 80’s.

Ok. Apparently the first session man wasn’t a flop enough. Sharing parts of the design with the first Session Man “multi-effect”, this unit pairs a nasty, short delay to what appears to be the same distortion section as in SS10. Board designs are completely different, as delay and chorus do not necessarily walk with the same footprint with each other. It must have taken a lot of work to create this. As features go, this one has your standard distortion controls, Level, Tone and Distortion. In addition, there is delay time control and series/parallel switch for the delay. Sticker on the left hand side of the battery lid tells us there’s more. Under the battery lid, there are holes, so that two trimmers can be accessed with a screwdriver. Those controls are a nice addition. Left trimmer controls feedback, or amount of repeats and the right one controls the overall mix of the delay. 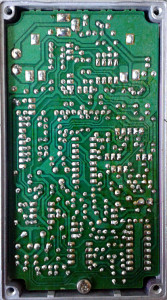 Board design is on par with all the other Power series boxes. Same semi-dull traces as with most of them. But as always with effects that are feature packed, this one has quite a few components in there. The design has a lot of tweakability to offer. And all the features do look very interesting on paper. Distortion and delay in the same enclosure with reasonable amount of control over the features? I think at least firm is making notable amounts of money with similar features today.. 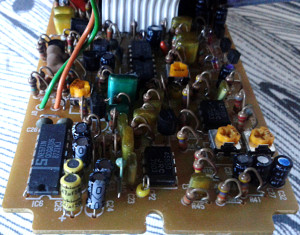 I have no idea about the number of units manufactured, but i suspect the number is rather low. These don’t seem to move much on auction sites and the prices are, well. Low. It is a full analog device and while the features seem promising…

How does it sound?
Good? Not so much. The distortion part is pretty much 1:1 with the open, uncompressed distortion that the SS10 Session Man offers. So turn the delay level down to nothing and you have a reasonable distortion. Do whatever you want to the delay section and you’ll probably still want to turn it all the way down. Delay is simply set for way too short delay times, making this a reasonable contender for DOD Hard Rock Distortion. But not much more. Nice novelty effect, but i think it sounds a bit more useless when compared to SS10. If you want one, make sure you don’t pay too much for it. As that would possibly make you feel bad.