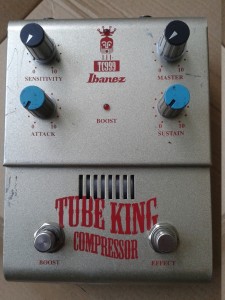 What is it?
Ibanez TC999 Tube King Compressor made in Japan in the 90’s.

It’s been quite long since i got this unit and took the photos (so sorry about the quality). Got this as semi-functioning unit in a trade. Problem was with the enormous amounts of hiss and interfecence when pedal was engaded. Dirk has posted a schematic up on his site, and i follewed that to see if power supply filtering had gone bad. Nope. Since the hiss was still there after i swapped the filter caps for new ones with same value, but higher voltage rating. Surely, the design isn’t meant to be used with a battery, but it did occur to me to try out the simplest possible diagnostic for power supply issues. Run it with a battery and see if the noise goes away. Yup. It does. Problem solved. Do not use a crappy power supply with this one. Some noisy squish is still present on high sustain settings, but i suspect that to be a feature. Other issues with pedal were your standard non-pedal enthusiast home made fixes. Like fastening the jack with superglue after someone had taken the threads off from the jack. Never. I mean Never fix anything with superglue nor hot glue. Please. Two of the knobs are not original, but that doesn’t slow us down too much. 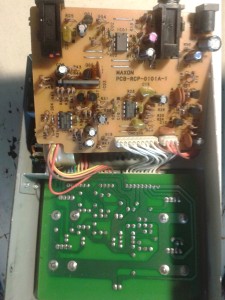 Mini analysis of the design shows that the tube is there to offer the BA6110 VCA SIP chip the pre-compressed tube sound input that a good compressor wants. Dynamics of the voltage controlled amplifier is better (at least in theory) than with the standard silicon amplifier. No, the tube isn’t creating the compression. The tube is there to provide enhanced dynamics for the otherwise near standard modern Maxon/Ibanez compressors with VCAs. For the controls, the Sensitivity is basically a gain control before the tube grid. This sets the amount of signal passed to the tube. Attack and Sustain are controls for the VCA parameters, more or less the same as we’ll find in Soundtank compressors. Master is your overall volume control. The stomp switch for Boost sets the input gain of the tube for two different settings. Pretty straight forward. 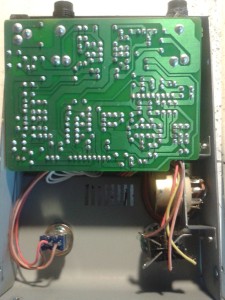 Two stacked boards look like most Maxon designs from the 80s and 90s. Neat, but somewhat dull. Overall, it is a compressor that has some good thinking and engineering involved in its design.

How does it sound?
Loud and mellow compression, with some noisy squish when sustain is maxed. The boost isn’t as clean as i hoped, but it’ll be enough for many purposes. Design part left me a bit puzzled or hoping to get more out of it. Guess it’s safe to assume that new ideas do not necessarily go hand in hand with “better”. It’s not bad sounding compression, but you’ll be better of with Ibanez CP5/CP10/CPL, Digitech Main squeeze or Marshall Ed. But yes. It has a tube in it. You’ll need to weight if its Mojo or brutal usability you’re after. You’ll get a better sounding booster out of almost any cheap boost pedal.