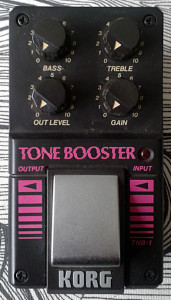 Korg hasn’t produced many guitar effects, but they are well known for their high quality synthesizers and other products. In fact, the Series 1 is just a rebranded Yamaha 01 series, both manufactured by KLM. Or the Yamaha series may by simply a rebrnaded Korg series. Hard to say, but to me it seems like KLM may have been offering various designs as OEM boxes for more than just two brands. Of this i’m not sure, but the designs show a lot of resemblance to those Pearl effects. All the way to the enclosure design… (Nope! “KLM” means the board is designed and built by Korg Japan, the other manifestations of the KLM circuits in other brand pedals are OEM’d Korgs. This was just brought to my attention and i was not aware of this before, thanks to Pepe!) Got this one in near mint condition and with original box. And for a good price, so i couldn’t let it go. I had studied the schematic earlier on and this seemed like a great preamp/distortion box. Schematic has “KLM690” printed on it. I’d be rather interested to know what other brands have bought OEM designs from that company… 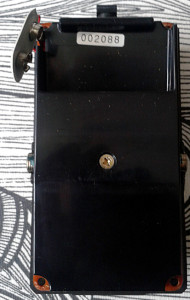 Really solid enclosure that is fastened through the top rather than from bottom. Relatively small board footprint and comes with dreadful asymmetry. Despite that, i think i’m just going to go with saying that the unit is very well designed and built. It’s not offering any high gloss eye candy on the board design, but i think it should handle heavy use for a long time. 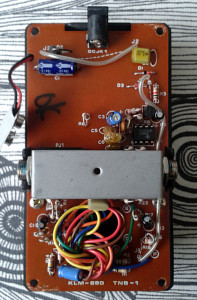 To analyze the schematic, there is input buffer that splits the signal for bypass buffer and the first driver stage. The bypass buffrer outputs to DPDT stomp switch and while it has two buffers on in bypass mode, i didn’t notice any of the sucking. With a short testing, that is. Anyway. The first driver stage is non-inverting opamp stage that has similar gain control that you’ll find in OD250/Dist+, only with 1M reverse log pot. This should give out more usable sweep for the pot and it does. This gain stage can be cranked to massive distortion. The stage drives a simple two band tone control which then passes the signal to recovery gain stage and volume control. I’d say the original designer has put the TL072 in good use. The recovery gain stage is inverting, so the wave coming out is inverted. This is not unusual, but something that user might want or need to know.

I find the bypass method interesting. Simple but effective. While the bypass buffer always gets the signal in, its output is switched between effect and bypass. Other pole of that switch either kills the gain stage or lights up the LED. It may not be anything super special, but it has some out of the box thinking involved. This is a very nice unit to have.

How does it sound?
From mild preamp to massive distortion with well working EQ section. Good ouput level and usable range from unity tone shaper to singing leads. It sounds good. No denying that. I’d still call this an distortion rather than a conventional booster, it offers nice versatility in tone. Good sounding well built unit. I do not see any downsides to this one.