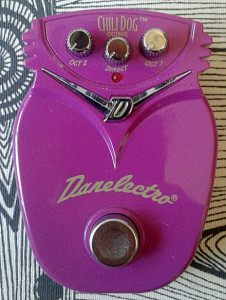 What is it?
Danelectro DJ-12 Chili Dog Octave from Dano Mini Series. Made in china around mid ’00s.

For one of the coolest mini series boxes. There are quite a few that are simply 1:1 ripoffs of higher end brand designs. It seems that mainly Boss and MXR have been hit hard by the Dano design team. Granted there are others too, but for this one.. I’m pretty certain that the design is derived from Boss OC-2 Octave. Only it’s about a half in size and squeezed in with tiny SMD components to make that happen. 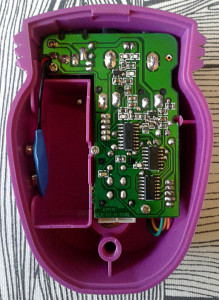 As there are no distinct differences in sound when compared against OC-2, i felt little enthusiasm in opening the whole unit up. Circuit is big enough that Dano engineers had to use both boards to accommodate everything. On many Minis, the bottom board only houses electronic bypass switching and sometimes in/out buffers. As you can see, that number of CMOS flip-flops isn’t used only for the switching. As with many other units of the series, the downsides are plastic housing and buffered Dano bypass switching. All the rest? An underestimated diamond in the rough.

As for the controls, the layout and feel of them is exactly one to one with OC-2. There is your dry signal level, plus own mix controls for one octave down and two octaves down. To put in in one word, Sweet.

How does it sound?
Sweet. Haunting, fat and the tracking is neat with occasional wandering thought. Like the flip-flops forget the signal they are getting in and head to south instead of west. The best tracking can be achieved with playing single notes around 10-15th fret. For chords this isn’t very useful, just as its Boss big brother. It offers quite clear down octaves that could come handy in number of occasions. For its cheap price and extremely high fun factor, this unit should be at least tried out. Playing with this one at home will result in severe brain melt, probably not as severe as with DOD BuzzBox or modded MXR Blue Blue, but still. Severe.