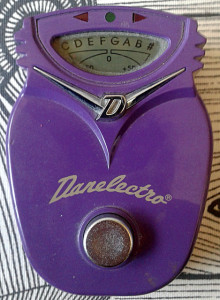 What is it?
Danelectro DJ-25 Blueberry Muffin Chromatic Tuner from Dano Mini series. Made in china around mid 00’s..

So this is the “fixed” revision of the Lemon Pitcher tuner pedal, the first one i called utter crap in the series. The colour of the unit is pretty close to DJ-11. The main visual difference is the “#” on the display. Well. Does the chromatic remake save the tuners for the series? 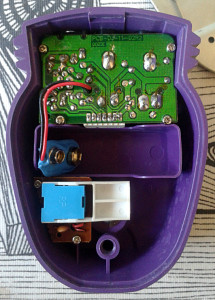 You guessed it. No. It doesn’t.

It’s similar to its predecessor, offering slightly higher accuracy and half note support. Still the dark illuminated old school LCD display still makes the unit completely unroadworthy. The greatest single thing that offers any interest is the use of the same PCB for the lower buffer board. Tuning results feel are more accurate and the needle seems more stable when compared to  Lemon Pitcher, but none of those do not address the biggest issue of dim LCD display.

So yes. Danelectro tried to make up for the mistakes with Lemon Pitcher. But failed again on this chromatic revision. On the brighter side, this one stands pretty well against DOD Tuna.

How does it sound?
As a tuner it doesn’t, but for usability? No. There isn’t enough of that to mention either. I can only think of one reason to buy one – You’d need to be collecting the series. For a tuner you want to use full time? Try anything else, or make your life easier by coughing up the needed amount of cash for a Boss or TC Electronic tuner.