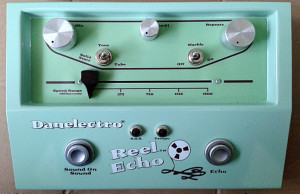 What is it?
Danelectro DTE-1 Reel Echo. Made in china in late 90’s.

Talking about action packed pedal. The desktop housing is rather big, but i’d call this stylish. For the visual design, features and general build quality, this is really one of those must have Dano boxes. Even the surf green color is pleasing. I could come up with more superlatives, but let’s go forward and talk about the features.

So this pedal, or more like a desktop unit, is a tape/reel echo simulator. Big aluminum knob on the left controls the mix between clean and echoed signals. in other words, between wet and dry. Big knob on the right is our feedback, or repeat as it’s labeled here, control. Delay time is controlled with a huge slide potentiometer, and the time ranges from zero to 1500 milliseconds. These three are the basic controls found in almost every single delay/echo effect. What happens with the rest of the controls, that’s where things get interesting. 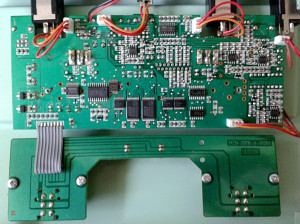 The small control in the middle is our “Lo-Fi” knob. This feature cuts a little highs from every following repeat, meaning that if the knob is maxed, the repeats will die in the same manner as on old tape echo units with worn out tapes. Warble switch offers simulation of a stretched tape. Tone switch selects the overall filtering to sound like circuit designer’s approximation of a solid state and tube based echo units.

On top of these features, we have S.O.S. stomp switch. S.O.s. in this case stands for Sound on Sound. This feature enables the pedal to act as a poor man’s loop recorder. With repeats set to sufficient level and the Lo-Fi set on minimum, one can play a loop and leave it on infinite repeats. Then just jump on the S.O.S. switch and play on top of that “recorded” phrase. I know i shouldn’t write like this. But it’s rather rare i get this excited over a unit… 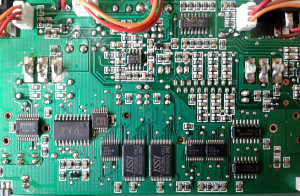 On the technical side, the design is all SMD and digital. This time i wasn’t even expecting any super-analog-wow. For the price these units sell and with the features they pack, it surely can’t be any analog-based design. And it isn’t. Those bigger chips are pretty much unintelligible to me.

The main board houses the effect and there is another slip of board for the switches. Modern board that simply screams Dano. Although i do find those cap and resistor placings rather appealing. Features could have been easily squeezed in a one fourth of the enclosure size. Enclosure size will be a big turn off for many. And i can’t think of any real use for the sound on sound feature. Other than for rehearsing or fooling around at home. These are the biggest negative issues i can come up with.

How does it sound?
Great. Simply put. Unit offers a lot of delay tones that have a nice vintage feel to them. Even though it’s a digital design, it doesn’t shine through. Only slight downside to this is the clean tone. True vintage sounds need that crappy low fidelity to them. This also breaks down to taste. From short slapback to second and a half delay times, from really clean to fun lo-fi warbles and tube sound emulation without any added  unnatural, ugly sounding distortion. This manages to do it. Very high bang for a buck factor. Pedal board friendly? Maybe not. But that aside, as a high quality delay/echo unit? Next to priceless.