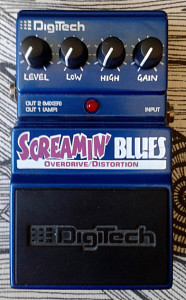 What is it?
Digitech Screaming Blues Overdrive/Distortion from “D”, or “Distortion” series. Made in china around mid 00’s.

When DOD seized to produce the later versions of the famous overdrives like FX50B, their closest successor would be the DOD FX102 Mystic Blues overdrive. When DOD seized to exist, the next step for the design was the Digitech Screaming Blues. In retrospect, the design analogy would be somthing like OD250 -> FX50 -> FX50B -> FX102 Mystic Blues -> DSB Screaming Blues. So is it a direct descendent of OD250 overdrive/preamp? I’d say sort of. Not that direct, but descendent nonetheless. Granted. The design differences between OD250 and Screamin’ Blues couldn’t be more a part, but then again, the FX50B isn’t that close to either one. All this may be be speculation, but the timeline matches. 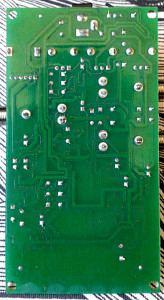 Modern, dull traces on a board where there’s room to do anything. Once again, this shares the electronic switching part of the board design with all the other “Distortion” series pedals. The buffers and in/out section appears to be the same too. As we can see from the photo below, the gain pot is dual gang, while the EQ section doesn’t differ that much from a Bad Monkey. 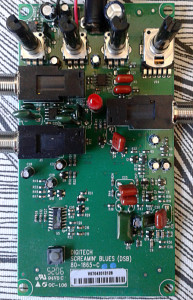 Standard mix of panasonic and mylar caps with all SMD resistors and semiconductors. Not too eye-pleasing, but the reason for the units greatness doesn’t come from the design. It comes through use.

How does it sound?
Defined, clear overdrive. Where as the Bad Monkey takes the prize with honking mids alá Tubescreamer, this one stays way more transparent and natural. Where does the “Blues” part in the name originate, i can’t say. But its armed with fairly versatile EQ section, ranging from thin and piercing to blasting lows and literally screaming highs and the drive control range is rather pleasing too. It surely goes from mild overdrive to big distortion. I don’t have a lot of bad things to say about this unit. It’s not super great, but it isn’t bad at all.

For the current market of used units, you should be able to score one for peanuts. It never hurts to have a usable, defined sounding pedal – may it be rather generic – in your bag. Especially when it sets you back a 20 bucks.