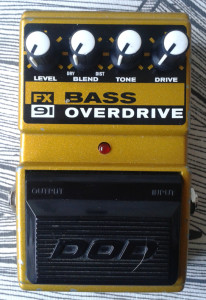 What is it?
DOD FX91 Bass Overdrive from DOD FX-series. Made in US around year 2000. No serial or battery door in tact, even though this late enclosure version has the door attached with a rod.

Bass overdrives are a fun genre. I’ve seen a few and nearly all of them are pretty standard overdrive circuits with no cut on the low frequencies. Which means that the designs may be slightly too fat for guitar, but i still think these should be tried on guitar too. America’s Pedal has some info about the unit. It apparently shares the circuit board with FX102 mystic Blues overdrive. There are more features for this version, which explains empty pads on both effects. 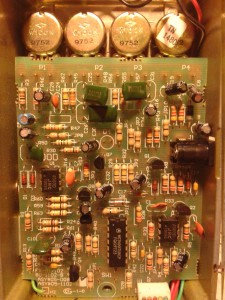 There is a schematic up on the web without the switching part. The drawing shows a buffer at the input, which passes the signal to pretty standard clipping amp and on to a Blend control which mixes the clean signal with the output of that clipping amp. That is followed by a tone stack and a recovery amp and a volume control. simple, but decent design. 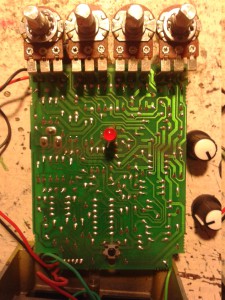 Interesting little fact about these units is that at least some of the units have a factory error. The R3 should be 1K resistor, but some units have a resistor with 200R value on its place instead. This change adds a noticeable amount of gain coming out of the clipping amp, and it shifts the frequency around too. You can read more about it at DIYStompboxes forum.

How does it sound?
Fat and useful. Serves well as bass overdrive and the blend control works also well. There’s enough gain to get soaring blast sounds out. I’ve played with this with a bass and a guitar. Bass is obvious choice to use this with, but it offers very nice boost features for a guitar too. Reasonably  good effect.