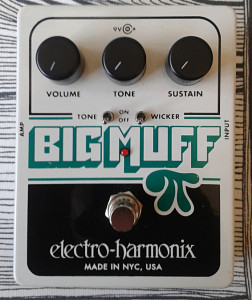 What is it?
Electro Harmonix Big Muff Pi w/ Tone wicker. Made in NYC, USA. According to the serial number, this unit has been manufactured in 2013.

A Big Muff with added features? Sure i had to get me one. It’s not that often that i buy pedals as new, but when my interest is piqued and the price is right, who am i to argue with the collector inside my head. And as always, i needed to rip it up as soon as i had a chance. After a epic battle with the DC jack, here it is. 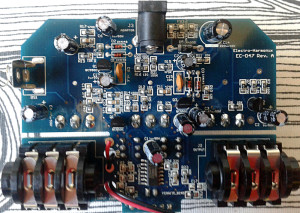 Otherwise all SMD, except for the aluminum electrolytics, diodes, main transistors and most interesting part of them all, the tone stack capacitors are ceramic. This could be a result of trying to recreate the feel of the old BMPs. This unit has BC550Cs for transistors. The same type we’ve seen on other modern reissues as well.

So the basic BMP is in tact, but what are the added features? First off, we have a tone bypass switch. A feature that was present in late 70’s / early 80’s IC version (also known as version 5). As the name suggests, the tone control is completely bypassed and full range of frequencies are pushed through. The old tone bypass switches had a resistor in the path of the bypass to compensate for a level boost coming from dropping the tone stack off the circuit. On this unit, there isn’t one. So the volume boost you’ll get by bypassing the tone is noticeable. The second switch is called “wicker”. 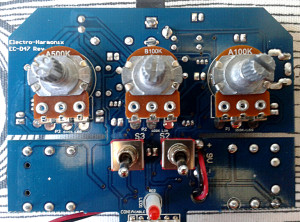 The “wicker” switch is quite peculiar thing. There is a CD4066 CMOS switch added on board and it’s controlled by other half of the “wicker” switch (the other pole of that switch is unused). What this switch does? It takes the small value hiss taming capacitors off from the first three gain stages. This results in increased noise floor, but it also gives a noticeable amount of more spike to the feel. Since there weren’t a schematic or anything definite about the wicker circuit online, i traced my unit. Check out the traced chematic here. I’d also suggest reading Kitrae’s notes and info about the unit on his awesome Big Muff page.

Box features EHX modern standard true bypass. To be honest, i’m not a big fan of current EHX board design or box/chassis grounding methods, but i am digging some of the sounds…

How does it sound?
Very nice addition to the BMP family. It can be used as a standard big muff with both, tone bypass and wicker switches in off position. In that mode it doesn’t differ a lot from any other Muffs. Or not at all to be exact. Once the Tone bypass is engaged, it reminds me a lot of the V5 BMP clone i built for myself (although my IC version clone tends to sound a bit more synthy, which is not a bad thing at all). And once the wicker is switched on, it basically takes the standard muff to a new, noisier level with added bite. So basically, we have four BMPs in one box. The standard sounds are intact, the tone bypassed, roaring Muff is in there and lastly we have something new to add to our palette. Seems like too many pedals get this “versatile” word out of me. On this occasion it is well deserved. The pedal, it simply sounds good.