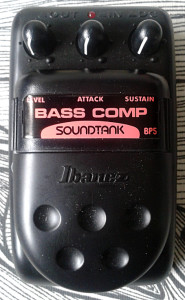 What is it?
Ibanez BP5 Bass Comp compressor from the Soundtank series. Made in taiwan around mid 90’s.

Who would have thought that BP5 was the hardest unit to find in all the plastic Soundtanks? Well it was. The complete series did come by more easily than i expected, but there were still a couple of the units that were a lot harder to find than others. My guess is that the number of manufactured units were correlating hard with the sales. Which also means that there are tons and tons of Thrashmetals, Power Leads, 60’s Fuzzes and Tubescreamers just waiting for you to grab them. While the less succesful units are getting scarce, one should still be able to source the Bass Comp or Autowah for relatively low prices. If one keeps him/her eyes open. I did finally get one. Don’t exactly remember what i paid for this, but it wasn’t too cheap. 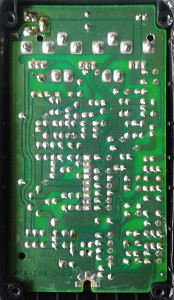 Once the bottom plate is out, the board looks exactly like the CP5, the guitar compressor from the same series. Once we take the board out to see it better, it is exactly the same board. Including the silk screened CP5 label. And if we look at these two closer, we see that there isn’t too much of a difference on the pedals. To be exact, the only change between CP5 and BP5 is one capacitor value. Sure. I knew about the differences before acquiring the unit, which may have been the reason i didn’t go for the ones that were out there with ridiculous price tags. 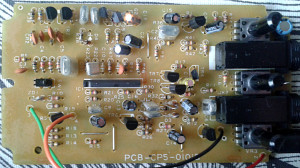 So this is pretty much the same pedal as the CP5, CP10 and CPL. Well designed and well working BA6110 VCA-based compressor.

I must wave a flag here. This is the last post about the plastic soundtanks for this blog. Yup. I’ve finally covered all of them. At the time of writing, there are still two metal cased units i’m on a hunt for. And those two are the original Thrashmetal (i’ve got three plastic ones) and the original Power Lead (i’ve got two plastic ones).

How does it sound?
If there is a difference between this unit and the CP5, i’m having real hard time hearing it. Not too noisy or mushy. I feel that the attack knob is rather useless, but that doesn’t make the rest of the features or sounds any less desirable. To sum it up, this is a poor man’s CP10. Defined and very usable unit. Superb thing with single coils. Haven’t played a lot with this on bass though.