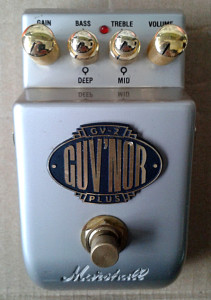 What is it?
Marshall GV-2 Guv’nor Plus. Made in china around early 00’s. Don’t know if there is any official name for this series of pedals, so i’m calling it “Small metal series”.

This unit is successor for the original Big Black Guv’nor. With added “Deep” control and a complete redesign, the design team must have had a goal of having the (in)famous tone intact, while modernizing the behavior and sound. 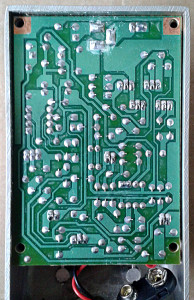 Board design matches the rest of the units in the series with its modern dull traces with autorouted visual feel to them. Otherwise the labor looks fine and this series boxes are well made. Should last your use and abuse for times to come. Schematic appears to be available online. This version of the factory schematic addresses a few issues on the board. First of all, some folks have found the tone stack to be nothing close to their preferences. So there are notes how to match yours to the original, black Guv’nor. And other thing. This addresses a considerable design flaw. There is a 470pF capacitor from after the volume control to ground. I have no idea what the designers were after, but value of 470pF will dump everything that would be called bright to the ground. Meaning that with this cap on board you are bound to lose a lot of highs. Sure. You could swap the cap for something like 47pF to have a way better higher frequency response. But is seems that many people want to omit that cap altogether. And i can’t blame them. 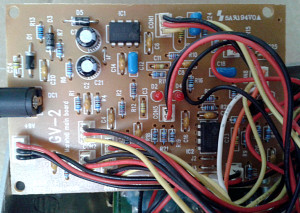 The dual operational amplifiers are once again TL072, manufactured by Texas Instruments. It is not a bad opamp and it surely seems to be a weapon of choice for almost every Marshall pedal. The clipping diodes are in hard clipping configuration, just like found in older Guv’nor version. So there are similarities, while the overall complexity of the circuit here is noticeably higher. 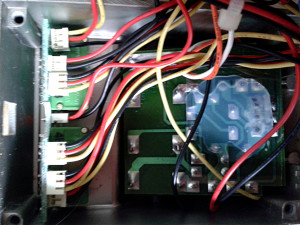 The circuit inside the box is made of three boards. One for the main board, one for controls (which are, no surprise, a 9mm pots with two of them having dual separate sweeps) and one for switching. The hot glue in there doesn’t look that good. Otherwise the build quality is decent.

The controls are your standard three band hi/mid/low for EQ, wich offers nice versatility. Other standard controls are gain and volume. The “Deep” control controls lower mids of the frequency scale from scooped to boosted.

How does it sound?
Certain qualities to the sound are per the original, nowadays a classic Guv’nor. This simply sounds way more muddy and undefined due to that single capacitor noted above. Three band EQ is nice thing to have and it follows the basic principles of the tone controls found in Marshall amplifiers. With the lower mids on a “Deep” knob, the tone controls are very nice and should be enough to please any tweaker. Volume levels are sufficient and the gain range goes from mildly overdriven tone to near massive distortion. But for the muddy and undefined.. You’ll be better of with some other pedal. Or you could just simply snip the C22 cap off the board.

For the price – it is an ok pedal. Not too great, but not that sucky either. One of the worst in the series, but still slightly better than many other manufacturer’s distortion units. Go figure. I don’t see myself using this for anything though.

4 thoughts on “Marshall GV-2 Guv’nor Plus”