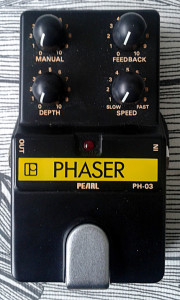 What is it?
Pearl PH-03 Phaser from Sound Spice series. Made in japan around early 80’s.

This is one if those boxes i managed to buy off from mr. Lindèn and it came with reasonable price too. The unit is very lightly used and it even has its own retail box with minimal wear. These do not come by every day. For example, at the time of me writing this, there are no units listed on eBay. According to Effectsfreak.com, these usually sell for something between 50 and 100 USD. This feels a bit low as there are not that many units available. Maybe this phaser simple hasn’t had the cult status of the overdrive or octaver boxes from the same series. I personally think it should. Here’s why. 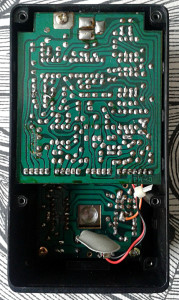 Classic hand drawn acid trip traces on a fat old japanese style PCB gives out eye candy that you can expect from similar boxes of the era. Solid quality and beauty combined. Pedal is made out of two different boards. One for bypass switching and the main board. Flipping the board over gives out a view that one did not expect to see in a phaser. I was waiting to see your standard Phase 90 derivative or something similar where phaseing is done with discrete JFETs. No. There are obvious modulation stages, done with dual opamps and an LFO, which doesn’t seem that standard either. The big chip in the has been painted black so tinkerers would have a hard time finding out what it is. Since there’s no telling what the chip is just by looking at it, i thought i’d check for a schematic if that would shed some light on the matter. There is an old factory schematic up at FIS. No luck. The schem says it’s “exclusive use”, which in pedals, usually means  that it isn’t that secretive, nor is it made exclusive for this design. Usually these are your standard parts that are just obscured. I didn’t want to stop there. I found an discussion about the circuit on FreeStompBoxes forum ( you may need to log in to see it). Anyway, someone had bought one of these as a defunct unit and found MC14069 chip where IC4 should have been. So it’s pretty obvious that someone else had already tried repairing that unit – by replacing the chip for something that clearly isn’t the right one. 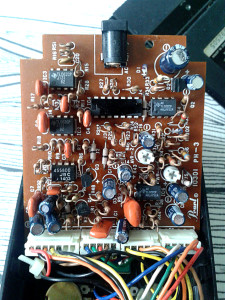 User Tube-Exorcist suggest that the original chip may be a AM79C11 (can’t find any info or datasheet about it), a obsolete quad JFET. Which would definitely make sense.

The design isn’t your run of the mill phaser. The LFO isn’t anything too exotic, but the modulation stage is. May the chip be what ever, it isn’t usual to have a quad JFET DIP16 chip in your phaser. If the chip is (and it probably is) a quad JFET, that would mean that the design is in its heart a four stage phaser. Still a sort of derivative to Phase 90, but not exactly. Either way. This offers some mystery and i like it. Besides, the four effective controls are also something that every other phaser doesn’t have.

How does it sound?
Lushy and wild. Not as deep as EHX Small Stone, but a lot more powerful than your average Phase 90 and its derivatives. From mild, slow sweeps to nearly massive wobble. Feedback and manual controls offer a lot of room for variation. It is very nice sounding phaser. Probably one of the greatest ones with only four phasing stages.