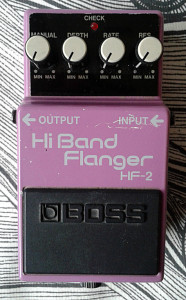 What is it?
Boss HF-2 HiBand Flanger from compact series. Made in japan, august 1988.

Japan made HF-2 is probably the most praised flanger, not only in Boss catalog, but otherwise too. While the “standard” Boss flanger may be and have been the BF-2 for decades, the HF-2 operates in slightly different manner. While most flangers mix the whole incoming signal with delayed duplicate (controlled by LFO to create the sweep), this Hi Band Flanger takes the incoming signal and splits it in two ways. Other stays as it is and the other is pushed to up octave which then has the flanging delay mixed into. Or so they say. That idea sure has some out of the box thinking in there. 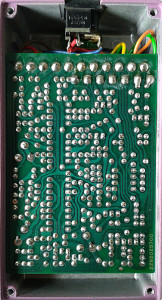 The board is full and still looking rather pleasing. The old school board manufacturing methods always please the eye. The delay section of the flanger isn’t anything special. It ihas MN3102 for the clock and MN3204 512-stage Bucket Brigade Device for the delay. The schematic is available for download through the interwebs. Looking at schematic, i’m not exactly sure how that half of IC2 and Q2 are supposed to create the clean octave up, but it surely won’t act only as a buffer in front of the delay circuitry. 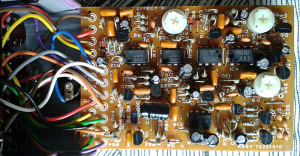 That being said, the HF-2 isn’t your standard flanger, but it isn’t anything too special either. Controls are very sufficient. Manual affects the Rate and Depth, while Resonanse controls how much delayed, or flanged signal is getting in the mix with original signal. The footprint is pretty common with most flangers and choruses.

How does it sound?
Don’t be expecting anything too wild. It is a very nice sounding flanger that goes from mild detuned vibrato to airplane hights. Overall tone is still rather tasteless and scentless, the same problem we’re facing with many Boss boxes. Sure it sounds good, but it doesn’t quite reach that acidy velcro flanger wildness the greatest flangers reach. It does offer slight variance to most usual flangers, which is a good thing. Controls offer good variance in terms of speed and depth. For me, the best use for this is to have it act as a vibrato. I do get whyt some folks prefer this over any other, but that isn’t me. Good but somewhat boring.