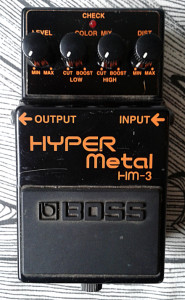 What is it?
Boss HM-3 Hyper Metal from Boss Compact series. Made in taiwan, march 1993.

The younger brother of since discontinued HM-2. Similar controls and expectance for similar sounds was high to say at least. This time there is some symmetry on the board design and even those machine like autorouted traces do not bother me that much. Not exactly sure how accurate the schematic up at FIS is, but i’m thinking the base topology is correct. So we have a design that’s somewhat close to HM-2, with the triple gyrator EQ tha has two controls and three separate clipper stages. 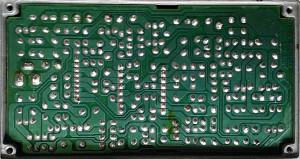 As usual for many Boss boards, the opamps are SIP devices. The asymmetrical clipping amp with distortion control is made of one opamp channel and NPN/PNP transistor pair. Still quite similar to the HM-2. In build quality and and housing issues, this doesn’t stand out of Boss Compact crowd. Solid, but dull.

All of the features feel a lot like HM-2 Heavy Metal, but power supply requirements are updated to be more modern and well..

How does it sound?
Actually better than the praised older brother. To my ears the distortion is slightly thicker, fatter and lows feel even more crushing with its soaring highs. The overall tone manages to stay quite defined even thought the amount of distortion is impressive. If i was to use metal distortion on my board, this would most likely be it.