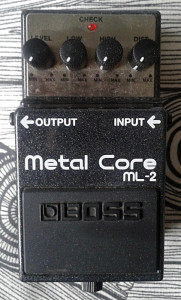 What is it?
Boss ML-2 Metal Core from compact series. Made in taiwan in january 2009.

Sure, i was interested in this due to its reputation. This is supposedly the meanest metal distortion there is and i’ve heard good things about it from people who i share a lot of opinions on sounds. So i grabbed one. I’ll get to the sound part later, but even though i agree on pedal tones with only few people.. This isn’t one of those where i agree. This unit took me by surprise. First question mark rose when i opened the bottom plate. 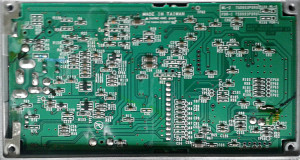 And the second one when i turned the board over. I would have never guessed by the demos and the praises i’ve heard that this would be a digital distortion. Constructed in the most boring way with all SMD and powered by what appears to be Roland branded DSP processor. The crystal clock is placed right beneath it. There are a couple of 1458 opamps in there too, but most of the design goes way over my head.

As for controls we have standard level and distortion knobs in addition to high and low controls. I’m not sure what the designer was after and why this design ended up this way. Maybe it was to recreate the designs that became classics by updating them with a digital counterpart? The EQ may be the best part of the circuit, but…

How does it sound?
I’m sad to turn to my prejudice on digital drive designs, but this time it is warranted. Even though the EQ controls try their hardest to mimic the gyrators of HM-2 and HM-3, the crushing and soaring this one tries to produce makes me feel uncomfortable. There is enough gain and while marketing suggests this to be answer to modern, next generation of metal players tonal needs, i can’t do anything else but disagree. Metal distortion, yes. Good sounding one? No. The sharpness and unnatural honk of all digital and/or modeling drives is present. No wonder guitar music is at its all time low.

Paired with a delay and used for those 80’s german detective tv series anthems – maybe (Although, you’ll get closer to that with Digitech RP-6). For anything else? Try HM-3 or MD-2.