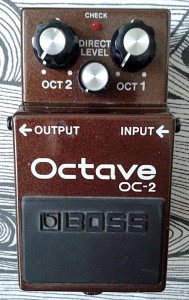 What is it?
Boss OC-2 Octave from compact series. Made in taiwan, april 2001.

Another classic from the Boss compact catalog. The OC-2s were originally housed in much lighter brown enclosure with the label “Octaver” on them. The name changed to “Octave” in 1984, meaning that the original ones were manufactured in japan from 1982 to 1984. These first issues are nowadays highly sought after and in one word, rare. And in another, expensive. The board on this unit is definitely a later revision. There’s not much left from the old school japanese design, and has been replaced with modern autorouted feel on overall board. 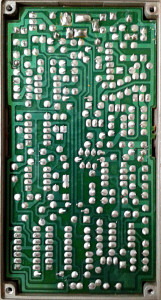 There’s a schematic with good semiconductor listings up at Hobby-Hour.com and you should check it out. This same page shows also the original board layout with original traces. There are one single  and one dual flip-flop IC on the original board design, but that has changed on later revisions. As we can see, the board of this 2001 unit has two CD4013 chips in the lower right corner of the board. There are other changes in the layout too, so the differences between a 1982 unit and this one are more than just minor. 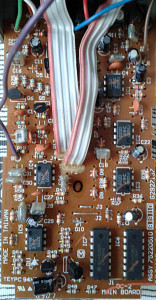 The two octaves down are using two channels of the flip-flops and the one down is using one. So the leftover one on the modern board is unused. How do these changes affect the tone? Don’t have a clue as i haven’t had the pleasure of comparing the modern one with the original design. Features are quite simple. We have three knobs which control the levels of clean, buffered signal, one octave down and two octaves down. There are two opamp channels driving each down octave settings. These controls maxed will result in wild, not so good tracking of the down octaves. The analog feel is strongly present.

How does it sound?
The tones this one produces are very good. Where as most old school down octaves tend to feel low on down octave levels, this isn’t a problem for OC-2. The tracking on OC-2 is also very respectable. Although, once the octaves are maxed, the guitar signal still feels a bit weak to keep the octaves in tact, resulting in brain melting, uncontrollable mistracking. Paired with a compressor before OC-2 will help to keep the tracking in line. While we’re at it, a fuzz of distortion before this will also give out very nice results. I think the most well known instances of hearing OC-2 in action are the CKY albums from the 00’s.

To sum it up. This is the octave effect to have. Even though OC-2 was discontinued in 2003 and replaced by more modern OC-3, the cult reputation and usability of this all analog down octave monster is well warranted. Definitely one of the best Boss boxes around.