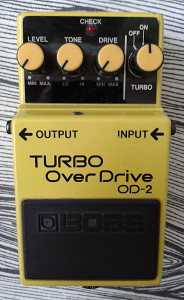 What is it?
Boss OD-2 Turbo Overdrive from Boss Compact series. Made in japan, march 1986.

The OD-2 was apparent attempt to create a follower for the classic OD-1 which already had a vast user base with lots of hype going for it. In all its simplicity, the OD-1 was pretty much Boss’ venture to kill DOD OD250 and MXR Distortion. Ẃhile it may not be as widely recognized as its older competitors, it’s still a cult classic. And for a reason. The original Turbo Overdrive was manufactured from 1985 and it got replaced by OD-2r in 1994. OD-2r is supposedly the same effect as this one, only with added remote switch jack for the mode switch.

So creating a follower that would sell well and be as recognized as its predecessor wasn’t a simple task. And this is what the Roland/Boss engineers came up with. The board is pretty crowded and it has the feel of the old japan designs. 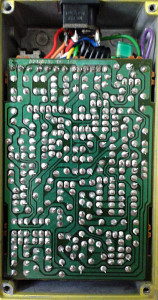 First thing that you’ll notice is that there are no opamps or any other types of integrated circuits in there. Once again, there is very comprehensive and good page dedicated for this circuit up at Hobby-Hour.com.  The page has a schematic and a semiconductor listing available. There are three gain stages, each made up with two JFETs and one PNP BJT. Not completely unlike the “discreet opamps” we seen in some designs (the BD-2 blues driver to mind at first…) The gain pot is dual ganged and controls the gain factor for two of these gain stages. The first one acts more like a boost and the second has asymmetrical clipping diodes on it. While the driver stages are pretty complex, at least when compared to very old school like tone and level controls, the wow factor doesn’t end there. Just take a look at the power supply section in the schematic. 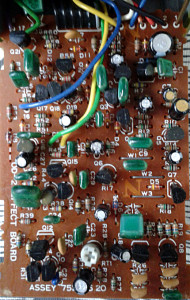 Well then. How did they succeed in the mission of bringing a successor for the OD-1? Can’t say for sure about the sales, but OD-2 and OD-2r were on the market from 1985 to all the way to 1999. If it had flopped real hard, it wouldn’t have stayed on the catalogs for 14 years. If you mean soundwise?…

How does it sound?
It does have a nice vintage overall feel to its sound. Tone and level controls are well balanced and the gain works pretty well too. Nice driver tones, but with massive mid-honkin’ feel. I’d say this sounds a lot closer to SD-1 than OD-1, without being too close to either one. I’m thinking this may have acted as a base when the engineers were drawing up the BD-2.

Sure it sounds ok, but i just don’t see myself using one for anything. The reason being that i find the OD-1 and the SD-1 to simply sound better.  And there are always tons and tons of Tubescreamer derivatives which can take this sound on any time of the day.