Let’s do a month with Boss pedals only. Why? Because i can. Starting the Boss august with PS-5 Super Shifter… 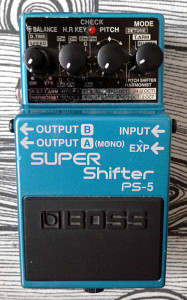 What is it?
Boss PS-5 Super Shifter from Compact series. Made in taiwan in april 2008.

To begin with. As usual, i ran the serial number through the Bossarea.com serial number decoder. This is something i always do whenever i get a new Boss pedal for my collection. Of course i keep a list of all the Boss pedals in separate text file. Now this wouldn’t be anything interesting, but as the current collection is, i placed the PS-5 next to PH-3 on my list. I must have been slightly tired, but i couldn’t make a clear difference between the rows for PS-5 and PH-3 (ok, i always read/edit the list with an editor that uses fixed font). The reason i got confused for a second was that these both units are made in Taiwan and in april and in 2008. Plus when you think about the list with nicely tab formatted text, you’ll know the rows will have a lot in common. Super vs. Phase, PS-5 vs. PH-3 and the dates.  Anyway. Got this in a trade about couple of weeks later of when i first realized that i don’t have any dedicated “Harmonizer”, or “Pitch Shift” effects in my collection. Wasn’t actively looking to get one, but it just happened. The guy trading it told me that he thought it was a nice effect, but he didn’t seem to use it much. 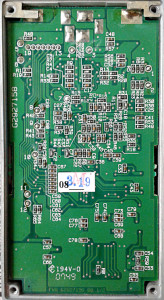 Opening the bottom plate showed nothing of any surprise. A board filled with tiny SMD components and so many “via”s that i lost count after the first 15 seconds. (For those not familiar with what i’m talking about – the vias are tiny holes on the board that are meant to take the connection to the other side of the PCB.) Flipping the board over continues with the same. A few big digital chips and a few operational amplifiers. Not my closest target for affection, but clean and neat nevertheless. 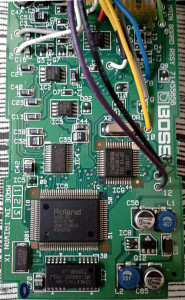 Which means that i’m not able to discuss the design at the moment. Yup. I simply don’t understand it well enough. There isn’t a schematic available, but the user manual is rather interesting read.

The unit is very feature packed. At first i thought the features just look like a lot and the up shifting is the main deal. No. That’s not it. I’ve been only playing around with this unit for a few hours since i got it, but mixed lightly on the balance pot and finding the tuning and a scale. That’s how it starts. It’s basically Boss’ answer to Digitech’s Whammy if you take a expression pedal and attach it to the PS-5. That plus all the static settings.  There are two features worth mentioning, even after all that. The “T. Arm” mode. The stomp acts as a momentary switch when this mode is on. This way one can get a digital reproduction of a tremolo arm function that comes naturally with Stratocasters. The last mode is “Flutter”, which is another digital reproduction of the thing most of us do with a tremolo arm. The features are pretty complex, so i’ll just leave you with that. And the link above to the manual.

Sadly, these features leave a slightly bitter taste. The question that rises, is this supposed to be a real, usable professional tool or just a toy to play around with? Other than that, it feels rather solid.

How does it sound?
The reason that guy didn’t use this much? I too was a bit put off by the number of features at first. There is a harsh digital feel to the most sounds this spews out. But i found the pitch shifter feature to be gold. Once the right extra pitch for the scale and the reasonable balance is set, this circuit sounds very good and nearly natural – despite all the digital harshness. Placing a fuzz after this will take a lot of the digital signature away and well, it’ll sound next to awesome.

In all, there are way too many different types of sounds to say exactly how this sounds. Some of the features sound very good and they have a purpose. Others are just picture clear resemblance of some plastic Tomy My First Effect Pedal toy. Toy aspect doesn’t feel too good, but there are a lot of usable range on the controls. If the user knows the pedal well enough, it may be a nice tool on a studio desk. Maybe the designing engineers tried just a bit too hard on this one.