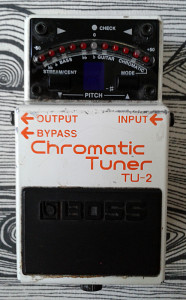 What is it?
Boss TU-2 Chromatic Tuner from compact series. Made in taiwan, june 2004

The workhorse. I’ve heard stories that these nearly didn’t make it to production at all, since the designers were sure that there would be no market for a pedal tuner. Well. I do get it. After all, the Arion and DOD had flopped pretty hard with theirs. But the TU-2 made it to production and if i’m not completely wong, it sold very well. So well that Bossarea page calls it an instant hit. 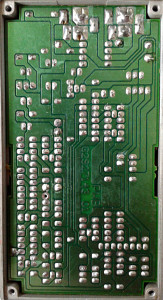 There are different tuning modes as features, but i must confess that i’ve never used any of those. Not even to try them out. The standard chromatic mode that picks up the note you play has been sufficient. For years.

Pedal is made of two separate boards, a mix of digital and analog circuitry. Nothing too eye pleasing with autorouted, tasteless and scentless feel to overall construction. 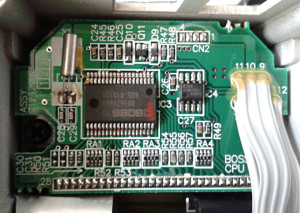 But then again, who buys a hammer for its looks? Metaphor for a hammer isn’t as far as you would think. As you probably have seen, there are pink and tiny designer hammers in existence, but no one in their right mind would pick up one of those if they were to build a proper wooden wall. No. They would pickup that old, rusty heavy thing that is a real hammer. 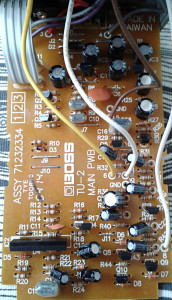 Boss TU-2 is (or was) a hit for several reasons. User can see the display on the darkest stage without disturbance, the accuracy is good enough and.. Well. It simply gets the job done. TU-2 got discontinued due to TU-3, which has more features and, i believe, is aimed to take on TC Electronics tuners in the market, which consequently have even more features. Come what may, the TU-2 will stay and enjoy its cult status. Less features sometimes mean higher usability.

How does it sound?
As most of the Boss pedals tend to drain your signal when bypassed, the buffering on TU-2 is either better than on the rest, or i may be turning def. While this tuner doesn’t sound like anything per se, it acts a faithful buffer when it’s turned off. As a tuner, this unit is something that all other pedal tuner manufacturers should take a look at. It works.