One more Boss before moving on… 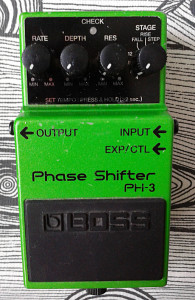 What is it?
Boss PH-3 Phase Shifter from compact series. Made in taiwan, april 2008.

PH-3 marks a very first digital phaser in the Boss catalog. All the previous ones, released before the year 2000, were more like all standard phasers from any other manufacturer – BBD based analog phasers. PH-3 introduced couple of quite innovative modes to the world. Basic modes are digital recreations of four, eight, ten and twelve staged phasing. Modes that were next to groundbreaking at the time of release are rise, fall and step modes. Rise and fall modes are also known as barber pole modes. Step mode sort of randomizes the sweep, resulting in unexpected phasing sweeps.

See. The new ideas on this one were so exciting that i simply skipped my normal pattern and ran straight to the features. Getting back to basics.. Board bottom looks like something that i haven’t seen in the compact series before. All  components are on the other side and the second side traces and vias look modern, but still quite new to me. 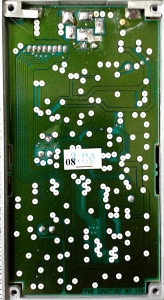 And once we flip the board over, we’ll have Roland branded digital signal processor. There’s a schematic floating around at Photobucket. To sum the design, there are analog buffers at the input and output. Connected to the mixing amplifier is the AD/DA converter chip. Which is then connected to a DSP and a CPU running at 4.233MHz. In  retrospect, a slightly faster processing speeds than what we’ll find in Super NES. Sure, i’m psyched about the geekiness of the fact. Way more than by the design itself. 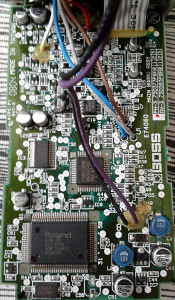 Can’t help myself. These computer-like pedals can offer some reasonable tones and sometimes even something completely new. Still i’m left cold and somewhat bored by the designs. It may be just current me talking, but analog designs are the ones where the real magic happens. I see little value for a VST plugin in a stompbox. This stance may change someday. But i’m fairly certain that day won’t be any of the 365 days of 2014 or 2015.

How does it sound?
Like most well designed/programmed pedals of the modern, digital world. These things get the job done without degrading the guitar’s sound too much. Actually, little enough to go unnoticed. The modes are new and exciting addition to the pedal sounds people crave. Even though it sounds good and the old school modeling modes also sound good, there is something missing. It just doesn’t feel like a guitar effect.It feels a lot more like a generic studio tool. Exactly like a VST plugin in a stompbox. Nice thing to play around with. But. Pre 2000 Boss effects are more my cup of tea.