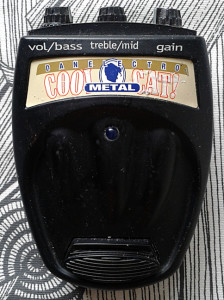 What is it?
Danelectro CM-1 Metal from Danelectro Cool Cat series. Made in china late 00’s.

Another metal distortion. While Dano’s Cool Cat series has pleasing and personal enclosure, most designs seem to be simple rip offs with very little original in them designwise. Currently i’m not sure what this particular unit based on, but everything about it is pretty much on par with all the other units in the series. 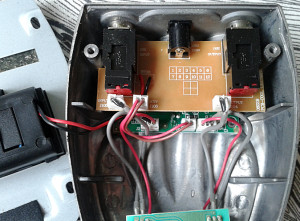 We’ll find three separate boards inside. One universal for 3PDT stomps switch, one for in/out/dc jacks. These boards are, like i said, universal and the same ones are used throughout the series. The bottom board is the effect. Construction is mostly SMD with couple of the caps being metalized polyester. Three oapms are running the show. 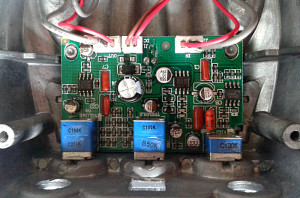 I’m pretty sure this is a slightly modified derivative of some other pedal. Just can’t point my finger to any directions right now. While it may look pleasing, the control knobs are horrible. Sure they are meant to be “set and forget”, but that set once part is killing me. Dual pots with stacked concentric knobs are not a bad thing if executed like in many boss pedals. Here, the turning of the either level usually results in both setting being shifted. Annoying.

I’d be rather interested to find out what this is based on. If you have any solid information, drop a line in the comments. I may study the connections at one point. If i happen to get interested enough.  To sum it – Standard metal distortion. Not bad, but not too great either.

How does it sound?
Like so may other motal distortions. EQ section is powerful and gain plus level setting are sufficient. The overall tone reminds me a bit of Boss HM-2, but here we have separate mid control. I do find this usable metal distortion, but it’ll always stay behind HM-2 and HM-3. I’d say this goes to the same category with DOD American Metal and Death Metal. Again, not bad, but not too great either.