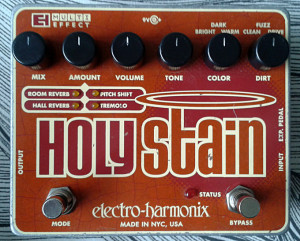 What is it?
Electro Harmonix Holy Stain from XO series.Made in united states in 2010(ish).

Once again. Put a pedal, any pedal, for sale with a broken switch and a price tag around 20% of a new unit. You bet i’ll be there, bombing your email and throwing the little money i have against the computer screen. This was one of those. Simply swapped the defected 3PDT bypass switch and did a little cleaning. Unit works as it should. Or at least close to it.

Checking out the insides shows a DSP based big board. All done in current, dull EHX manner. I’m guessing the drive/fuzz/distortion is done with transistors and the rest is digital. It’s sort of like a modern hybrid. 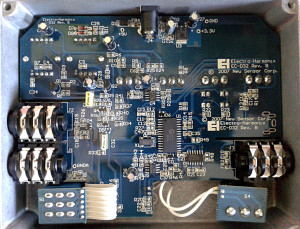 Let’s talk about the features a bit. To begin with, the Holy Stain looks like a cross breed between a Muff and a Holy Grail Reverb, with a few added extras. The main stomp switch is our bypass that sets the overall effect on and off. The basic side is controlled by two rotary switches, a tone control and a volume control. The first rotary selects between clean, fuzz or drive modes. The second selects overall tone color between bright, dark and warm. Tone control acts pretty much like the one on big muff pedals and volume is rather self-explanatory. All that is used to set the base tone.

Then we have the rest. Foot switch selects the digital effect mode between room reverb, hall reverb, a pitch shifter and a tremolo. These four modes share the two controls for all of them, the mix and amount. Mix sets the blend of this extra effect against the clean/fuzz/drive tone coming from the first part. The amount acts as a decay time setting for both reverbs. It also sets the frequency of the pitch shifter mode and the rate of the tremolo. Amount can be rocked with a external expression pedal, which makes the tremolo mode a lot more interesting and the pitch shifter to have similar features to a Whammy.

Limited, but still quite a set of features. These usually come pretty cheap, even as new. But if you think about the features and compare them to what you actually use – or want to use. For me, i would probably gone for separate drive and effects sections with a stomp to engage/disengage the effects other than the drive side. Sure there is notable amount of outside the box thinking when the designer has set the features, but…

How does it sound?
I’ll start with the good and go on about the bad a bit later. The Fuzz mode is actually good with its crisp lead sounds. On fuzz mode, the color settings are usable too, even though i tend to leave it on warm. Both reverbs are ok too, with a slight note explained further…

Off to the bad. First off, to me (yup, may be heresy, but i’m talking about my taste) the clean and drive modes are just bad. First thing that comes to mind is the horrible distortion section found in Digitech RP6 multi-effect. Color and tone controls won’t save those, no matter what. Other reason why the RP6 pops up to mind is the latency. All the digital effect modes are fine if you have your mix control below 35% mark. Higher than that, the guitar signal has already gone out of the speakers before the verbs/shifter/tremolo even think about touching the signal. Similar digital lag as heard on RP6.

One very good mode with almost usable multi-effect section – if you keep the mix down enough for it to work right. Otherwise… no.