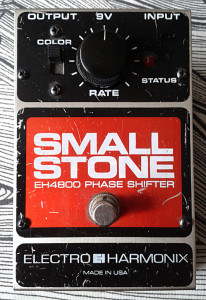 What is it?
Electro Harmonix Small Stone EH4800 Phase Shifter. Made in USA, possibly in early 00’s.

This wasn’t the first and certainly won’t be the last pedal i’ll buy as a broken unit. Sure there have been units that were beyond repair and those will always hurt, but usually i tend to be able to fix them. This particular unit has all the OTA chips socketed. The symptoms were that the pedal only worked with a battery, but not with a power supply. True. This was the case. But even though i suspected a broken connection from the DC jack, the truth was that everything started to work right once i pressed the ICs firmly back to their sockets. Which makes me wonder why all the chips are socketed in a unit that’s manufactured in this scale. Who knows, maybe not all the chips work perfectly in this circuits and they need to be swapped around. 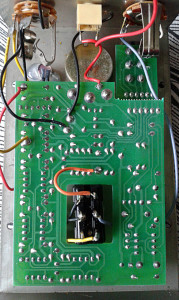 Since the early versions of the 70’s, the design has always been using OTA chips to create phasing. There is a distinctive difference in sound of JFET-based phaser when compared to OTA-based design. According to the internet, the early units had CA3094 and CA3080 chips in them. The later versions, due to obvious reasons, are done with LM13600/LM13700 chips. If the reason is not yet obvious to you, the CA3080 was discontinued about 10 years ago, and the CA3094 even earlier. While there are a number of CA3080s available through auction sites, the price and availability isn’t exactly right for manufacturing of this scale. LM chips are still in production, even as surface mount chips.

As for most classic circuits, there is a schematic floating around the web. This one’s drawn by Bernandduur and as always with his work, it is a pleasure to look at it. There’s a quad opamp for in/out buffering and LFO, plus two dual channel OTAs for the phasing. Basic manufacturing methods on these units look ok.  Neat, but not too pleasing.

A deep wobbler with definite personal sound. Decent range on the rate knob and depth of the phase goes way beyond what we are used to. Even though the sound is very good, don’t expect to get soft and mild slush out of this. This is a lot more like a shock effect than ambient phaser. Prime example of good EHX design. Something that’s not exactly like all the others, and successful at that.