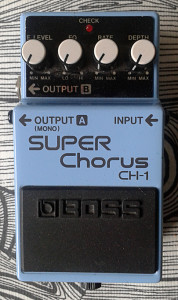 At one point i woke up to a feeling. I had tons of effect pedals, but zero Boss brand choruses. That felt extremely weird, as these effects in Boss catalog are usually praised pedals. So what was i to do, bet to get me some. First i scored a CE-3 stereo chorus through auction site listing (i’ve talked about that unit earlier on..) and second, i grabbed this one as used from around here. As usual, i checked the serial number against the Bossarea decoder and checked some facts about the design as well. What do you know. Just my luck. This unit is one of the very first CH-1s to exit the factory with newly revamped SMD board inside. Just a month older, and it would have been the one with a pink label and a MN3007 as a powering BBD. 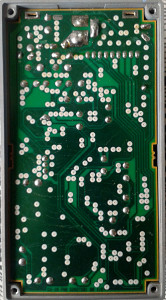 The original CH-1 was apparently a derivative of CE-2/CE-3, with added blend/mix control and a tone control, which allowed the user to set the audio frequencies processed by the chorus. But since the changes between the old design and this one is pretty huge, i honestly wonder why this wasn’t marketed as CH-2? The changes would have definitely warranted that. But then again. We have DD-2 and DD-3 delays which have the exact same circuit inside, but for some reason the model number was changed. Peculiarities are sometimes fun, but… Everything about the design look even newer than the actual manufacturing date, but i guess that’s to be expected. 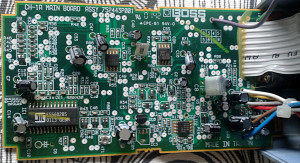 At the first look the board looks a bit like just SMD version of the original. We do know that DDBs come in surface mount packaging too. And the long chip could be a CMOS chip to handle the electronic switching. But no. Closer look revels that there aren’t any BBDs present. Just a digital 20K Itri Erso ES56028 echo processor chip.

I haven’t had a pleasure of comparing this against the  previous version. I highly doubt these two sound anything alike. At least the delay line is different enough to warrant this assumption.

How does it sound?
Decent chorus, nevertheless. Mix control is nice addition when we want to dial in smooth and ambient chorus tones. Tone affects the frequencies chorused, rather than the overall tone. Another feature that gives more to the sound than one would think.While all Boss choruses have a great reputation, i tend to see one fault in all of them. The range of LFO speed feels to be always from too slow to slow. Same thing here. If we disregard that, we have good controls and nice chorus sounds. Not  perfect, and i’d still choose my CE-3 over this in a heartbeat every time. If you get one for ridiculously cheap, then get one. I may keep my eyes out if i happen to run into the pink labeled version at some point. Comparison test would definitely be worth a post…