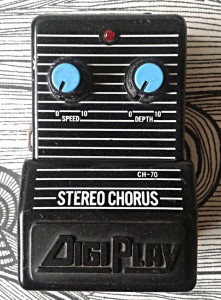 What is it?
Digiplay CH-70 Stereo Chorus. Made in japan in early 80’s.

Saw this unit up for sale with a price tag of small pack of peanuts. What was i to do, but to get it. The switch was acting up, but simply cleaning it up with suitable chemicals did the trick. I didn’t know much about Digiplay boxes, other that they are from japan and vintage. Heck, i still don’t know much more. There isn’t that much of documentation around of Digiplay boxes. For now, the best source of extra information is Effectsdatabase. FXDB knows that the unit is basically one of those pretty generic designs that emerged in early 80’s. Apparently the box is pretty much the same as Wasburn’s most acclaimed chorus, the A-SC7. And close to Loco Box CH-1. 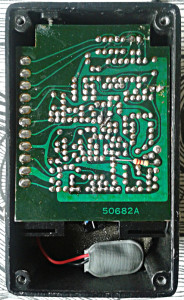 As with many others, there may have been one designer and one manufacturer for all these generic boxes. But why should it matter if there are about ten brands out there with the same exact effect? I do not know any reason why it should. No matter about the prestige of the brand or design, here we have extremely pleasing acid trip traces on vintage japanese style board. 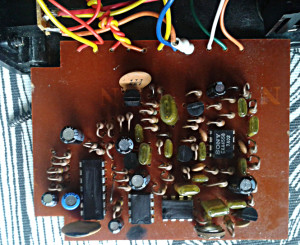 Clean hand soldered board, but wait a minute? CD-chip and the BBD+clock have been sanded? Apparently sanding the markings out isn’t a new trick brought to us by bad boutique designers, but it has been around for a long time. Yes, the estimate of DIP-14 chip being a CD4000 series chip and those two DIP-8s being BBD and a clock is pure speculation. But it is a chorus, so chances are the chips are some sort of vibrator/BBD/clock combo. 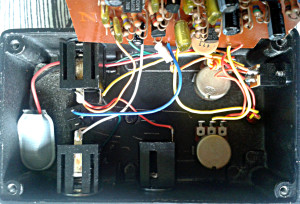 I’m about 99,99% sure the design is all analog. Could the brand name be a hint of simpler times when everything digital was a huge advantage as a selling point? In general, the work and wiring is neat. Everything is looking like it should. This is one of those well made japanese units from early 80’s.

How does it sound?
Usable, soft and nice. But very generic and rather faceless. The sound is exactly what you’d expect from any two knobbed stereo chorus pedal of the era. There is a reason why Ibanez CS9 and Boss CE-2 are pricey classics and Wasburn/Loco Box/Digiplay choruses aren’t. One does get close with a fraction of a price and let’s face it – if you are playing gothic rock, you’d be better of with this unit than one of the highly praised ones. Not bad. Not too great either.