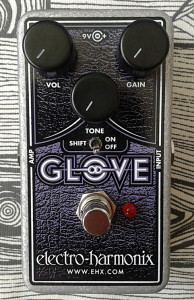 What is it?
Electro-Harmonix OD Glove from EHX nano series. Made in NYC in 2013.

An overdrive that sounds like nothing else on EHX catalog. That’s the catchphrase from the marketing material. Sure enough. It isn’t close to anything from current or past EHX catalog. But it is rather familiar from somewhere else. Take a look. 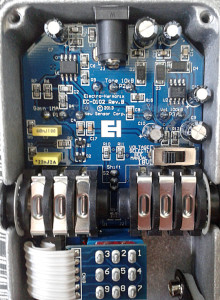 The chip on the right is ICL7660S, a DC-DC converter, which doubles the incoming 9V to 18V(ish). There’s a slide switch for selecting the use of standard 9V or doubled. I suspect the 18V doubled mode will eat your battery a lot faster than the standard voltage mode, so a switch may have been a nice idea. How does it affect the operation or sound.. That’s another story. But let me say – not that much. There is a distinctive difference, but t actually hear it, you’ll need to be somewhere else than your rehearsal room with the rest of your band.

The main circuit looked pretty simple when the function of the other chip was established. Couldn’t help myself but to trace the whole thing. Here are the results. Does it look familiar to you? Non-inverting gain stage with gain control, hard clipping done with two MOSFETs (shunt to VRef instead of ground), a recovery stage and a two mode switchable, simple tone control. All that followed by a standard level control.

If you haven’t seen this before, i guess it’s time for you to get yourself a 18V running, MOSFET clipped, tone control added derivative of a Voodoo Lab Overdrive. Or in other words, a very nice and super cheap derivative of something related to an obsessive compulsion disorder.

How does it sound?
Fat and distortion-like overdrive. Very nice sound that sits well in somewhere between a Voodoo Lab OD and a MI Audio Crunchbox. High gain overdrive that’ll suit many occasions with its good controls and good range from near clean to overwhelming drive. The 18V switch adds some headroom, which lets the pedal to live a bit more than it does running on 9V. Treble cutting the tone knob does may be useful to most as well. I’ll keep this short. It sounds good.