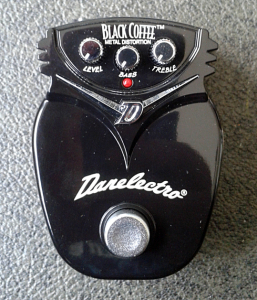 What is it?
Danelectro DJ21 Black Coffee Metal Distortion from Mini series. Made in china around mid-00’s.

Finishing up with the Dano mini series with the last unit. With this one i’ve finally covered each and every one of these plasticky things. Some were surprisingly good, some very decent to say at least and some were.. Well. Not that great. It’s been an interesting journey, neverthelessx. Black Coffee is the straight on metal distortion of the series. Straight on and nothing else. Like many others in the series, construction is all SMD on two stacked boards. 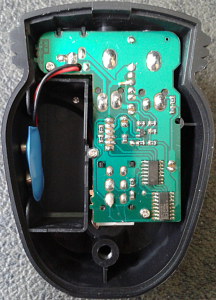 Design consists of thee dual opamps and couple of transistors. Quick search on it shows that user Bernandduur has a traced schematic up at freestompboxes.org forum (you require an user account to see it). The main thing about the design is that the circuit is pretty close to Fab Tone from the original series. No gain control when compared to its predecessor, it’s just fixed at maximum setting. That equals to a lot of gain. Tone controls are gyrator for lows and variable low pass for highs. Decent design and it doesn’t hurt that it’s not a straight on copy of some other brand’s design. 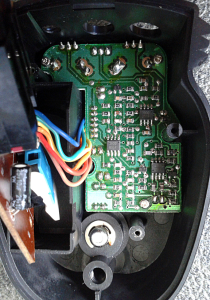 So we have our level, lows and highs controls with standard Danelectro electronic bypass switching. EQ is rather powerful, but it has nothing on Boss HM-2 and HM-3. Even mentioning those two in this post feels wrong.. Biggest downsides come from the plastic housing, switching and..

How does it sound?
Sadly, not that great. I think the value differences and other slight changes between this and the Original series Fab Tone are enough to put some distance between the tones. Gain content and decent metal style hard clipping or wave folding elements are where they should be, but something makes this just sound and feel hollow and empty. Lack of true low boom is the biggest culprit in its sound. That doesn’t appear to be missing from the Fab Tone, so i think it’s safe to assume that all of the component values aren’t the same between the two. This sounds like a fine plastic toy, but it is still a rather dull one trick pony. Not totally awful. But there are number of better sounding death metal tones for the same price around. And those aren’t plastic nor do those feel like it. I’d say this one has collector value only.