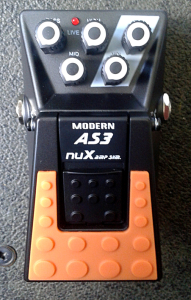 What is it?
Nux AS3 Modern Amp Simulator. Made in china around mid to late 00’s

I don’t know what it is. I really can’t point my finger to one particular thing on these and say; “this is why i like Nux Effects!”. But i do. Or least i did. I recall talking to people about how Nux is the solid brand that can turn the low brand value, cheap chinese pedals around. Unless they decide to start OEM’ng their designs to other brands that have low brand value to begin with. This, one of my mildest nightmares came into reality in mid october 2014. I noticed that at least one chinese retailer was offering the Force and Core series effects with another brand name. No. Please don’t do that. Nux was the only modern chinese brand that didn’t have a six year old graphic designer and they didn’t save money on all the wrong places (just on few key places, but not on all). That day was very sad day for me. But what can i do? Nothing. So let’s just forget that misfortune for now and focus on the unit on hand.

This Cherub/Nux series that i like to call “The First Series” hasn’t let me down yet. The overall feel of the boxes is solid and firm. The cheapest feel comes from the battery compartment lid, which in my opinion is placed rather geniously. The user can change the battery without lifting or even tilting the pedal. Not that i know a lot of people using batteries, but still. I think this is just the kind of ingenuity these factory built pedals need today. More on the feel, the pots in this series are not the cheapest kind and they feel solid too. Now, to open this puppy up.. Modern autorouted look. But still neater and more solid looking than current Bosses. And the rest of the manufacturing methods leave no bad word in my mouth. 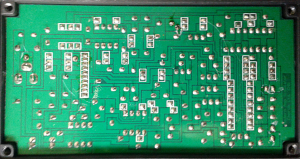 And once the board is flipped over.. Awww. It reminds me of US made DOD FX series board. Warm and fuzzy feeling with its all analog, all through hole construction. The pots are mounted on their own daughter board. 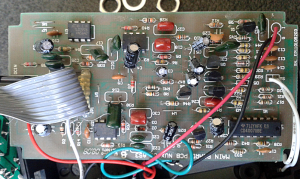 I’m not aware of the exact topology of the circuit and thus, can’t analyze it much further at the moment. Looks like this has two TL072s and one 4558 for opamps. The D2-D3 silicon diodes look like they might be clippers. I’m not going much further in this guessing game, but even the design looks rather solid. While i do like this box like a young man likes his date, there is one caveat.

How does it sound?
And it is the sound. This is most likely a predecessor of the black AS-4 from the later series and the circuit has been revamped for that release. This earlier one works nicely as a light dirt driver, but it’s hollowness and mids leave a lot to wish for. While this pedal is way greater than its follower on the outside, the better version made its way to the cheaper feeling later version. The bright side is that the EQ section is powerful and working well (i’m guessing gyrators). So i’m left with mixed feelings. As an overdrive effect, this is a lot better than many Tubescreamer derivatives, but as a full blown preamp, not so much. I believe these have out of manufacturing line for a while now. So if you can score one for ridiculously cheap, i’d suggest you go for it. It may not sound like much, but there is some usability in there.

Plus this unit reminds us all what potential Nux had before they changed to cheapest parts and resorted in OEM manufacturing for even lower end brands. World is a cold place.