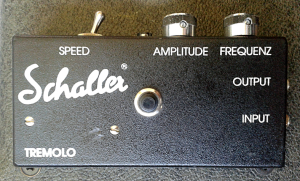 What is it?
Schaller TR-68 Tremolo. Made in germany, possibly around 90’s. Not sure about the date, but this version is without an indicator LED which is present in the later models.

I used to own one of these back in the days when millennium changed, but for a reason or another, i had to sell it around 2002. The memory served and i did miss the pedal. A lot. The i came home one night, drunk as a skunk and check out the pedal sale listings. Someone was selling TR-68 for peanuts as a broken unit. My first message to the seller may have not been the greatest piece of literature ever written, but we ended up making a sale.

The issues with the pedal were quite minor. The frequency pot was slightly loose and it was turned against the conducting wall of the enclosure, grounding the whole circuit. Plus the battery snap was turning in to dust. Former was an easy fix. Second too. I hadn’t fixed the second at the time i snapped the photo below. 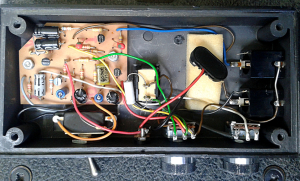 Quite a lot of hand wired connections for a pedal of this age. The construction feels like good vintage. There is very little wrong with this pedal. Solid, original discreet design, high quality flip switch, most of the components are of german origin. The worst caveat is the non-bypass. Everything else just screams quality, integrity and sense in quality.

As for features, there are LFO frequency pot and amplitude pot. Former controls the speed of the amplitude modulation and the latter controls the effective depth of that frequency. Depth goes from near zero effect to silence versus unity level. Frequency ranges from very slow to fast.  And then there’s the speed switch, which changes that very slow to fast to from fast to very fast. Not fast enough for ring modulation speeds, but this is a tremolo, not a noise tool. And the LFO wave… To put it the best way i can,  LFO waveform is smooth.

Saddest thing is that it took me twelve years to get it back.

How does it sound?
Sine waved tremolo that just sounds awesome. The LFO wave is tweaked to perfection, so there is no need for a wave control. This circuit footprint simply works and sounds great as a sine type wave. Non-bypass is a know tone sucker, but somehow it feels right on this one. Or at least it doesn’t bother as much as bad electronic switching buffers that sometimes suck your tone in a bad manner.