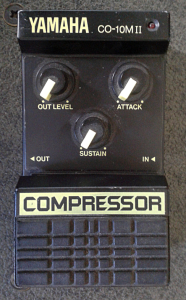 What is it?
Yamaha CO-10MII. Made in japan, 1984. Date is determined from capacitor date codes.

Continuing with another fine specimen from Yamaha’s 10MII series. This unit is one of those i’ve sourced from a local guitar building wizard, Mr. Lindén. I know i’m a sucker for this enclosure type, so every time one shows up for sale for a reasonable price, you know i’ll be there lurking. The coin-op box. It’s just neat and has a high degree of personality. Candies keep on coming ones the bottom is opened up. 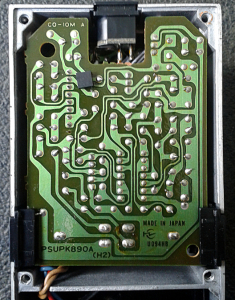 That is just beautiful. Hand drawn board design  that looks like it was created with a machine. Less acid trip style, but still visually pleasing. Very pleasing. The board thickness is also appealing. Like many japanese boxes from the era, there are two boards that make up the circuit. Many designs use the second board for controls only, but Yamaha engineers have taken everything they can  out of the space available. As the photo below shows, tis design is OTA-based and powered by Japan Radio Corporation manufactured 13600 dual OTA. 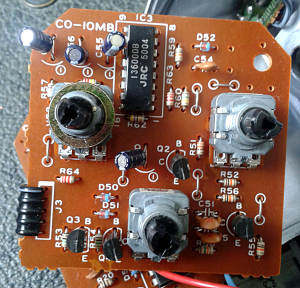 The pots are used for pretty standard set of controls. We have our output level (or volume), Attack time control and the amount of sustain. There are practically no schematics available for nearly any of the Yamaha pedals. Due to this injustice, i’m only guessing the design is your average OTA compressor in the vein of Ibanez CP9 and many others. Maybe i’ll need to do some reversing on these someday. 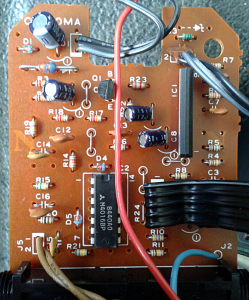 I’m pretty sure the CD4016 is there to take care of the electronic switching. Rest of the circuit most likely is for buffers, trigger, compression/sustainer stage and mixing amplifiers. The TA75559 is most likely taking care of the buffering or mixing. Or possibly even both. 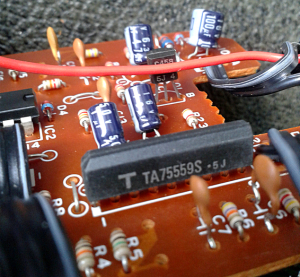 So there you have it. A beauty. From the outside and from the inside. But even if everything made is like it should be, the pedal still may not reach to the level it may have deserved to reach. And there’s a reason for that.

How does it sound?
While everything else about this pedal is more than right, the base to it is quite dull and boring.  The tone reminds me of Ibanez CP9 a lot. In good and in bad. First of all, the control ranges are moderate at best, but it still feels like there’s something missing. That’s the kick. The same thing is also missing from the Ibanez mentioned above. While the sound is not bad, it’s not great either. For a collector, this unit has a value of its own. For a player? Nope. In my educated opinion, the mid-00’s Marshall ED1 Compressor simply does a better job and sounds better than this. This opinion doesn’t say anything the Yamaha compressor, but it says the Marshall has a high potential and user value. Even though this Yamaha compressor may not be as usable as many others. This works ands sounds the best as always on -style pedal and with single coils. If i was to give stars for these units, the CO-10MII would only get four out of then. It’s not that it’s a that bad sounding pedal. It’s about sluggish control ranges and lack of personality in its tone. Bunch of personality around this design, if we don’t take the the sound into account. Nice thing to have, but i don’t think i’ll be using this much for anything anytime soon.

Yes. If it didn’t look as great as it does, i’d be slamming it on this post. Hard.