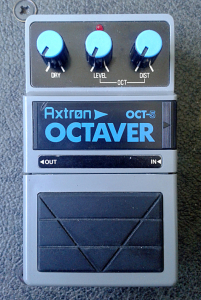 The sucker for down octaves that i am, i just had to get this pastic thing. It wasn’t even that cheap, but these japanese plastic oldies do not come by that often. So i went for it. There aren’t that many of these moving around, even in the other brand names these were offered back in the day. The same circuit in the same enclosure was apparently sold also under Axtar, Pickboy, Columbus, Profile+ and Vision brands. The same effect. In the same enclosure. Not that uncommon for japanese units back then. This series apparently had ten different pedals in its catalog. Haven’t seen many others for sale anywhere. Possibly the folks having them are still convinced they are worhtless garbage. That assumption is not that far fetched. 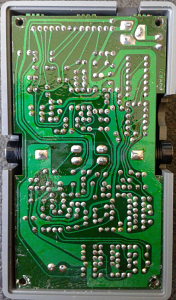 The build quality is cool. Hand drawn traces and neat solder joints. The sin of japanese designers in the 80’s was the plastic housing. If these units were housed in a metal case, the sales would most likely have been higher. Nevertheless, the work looks good and the pedal utilizes the classic japanese two stacked board layout we’ve seen in many other units. The elctronic switching seems to be similar to old Boss and Maxon/Ibanez flip-flop switching done with two BJTs and the actual switching by FETs. The effect circuit seems to be created with two Sony branded 4558 dual opamps and a 4013 flip-flop for the octave divider. 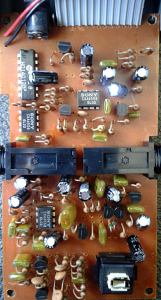 There are three knobs that control the clean signal level, octave down level and the distorted octave down level. So it’s not exactly like the big sellers, OC-2 from Boss, MOC-1 from Arion and so on. The circuit seem to have something personal going on for it. But even though it may be well made and the design of the boards look promising, there are some caveats.

How does it sound?
This being the biggest one. It’s a well tracking down octave, that’s created in a same way others have divided octaves since the days MXR Bluebox was first out (there may be earlier examples, but Bluebox is good to mention). The distortion side of the effect also has a nice structure and texture. Nothing wrong with those. But. The overall level, even with all the knobs maxed is below unity. This renders the unit more or less unusable. For a collector and a freak for down octave dividers, this may offer some value, but for anything else. Nope. Not that much. If you are not a collector, do not spend more than 25 buck for one. It most likely will not be worth anything more than that. May the brand be any of the ones mentioned above.