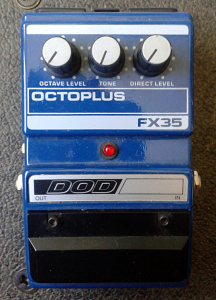 For the love of octave dividers! Some will always say that one can never have too many fuzzes. Well. I say one can never have too many down octave divider pedals. As with most of the effects in the genre, the signal is pushed as hard as possible to CD4013 CMOS flip-flip circuit. This will result in our good ‘ol analog down octave tones. The downside to achieving down octave tones with a flip-flop is that the tracking is hard to keep in line. As these dividers go, DOD does it slightly better than other. But i’ve talked about tracking before. So let’s get down to business and open this beast up. 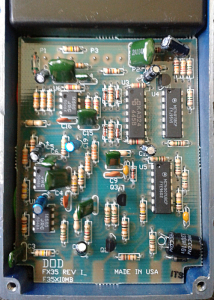 I do feel a bit solace wheneven i open up one of the FX serie DOD. There may not be much symmetry or any other eye candies around, but since the boards are always neatly made, there’s not much negative to say about them. Sure, it could be prettier, but the functionality in design is much more in portant aspect in DODs. Like in architechture of buildings, DOD FX serie represents the functionality. As i said, it may not be that pretty, but it gets the job done. There is an original schematic up at America’s Pedal, in addition to a bit of more information. There’s even a scan of mid 80’s print ad up in there! You should probably check those out as well. 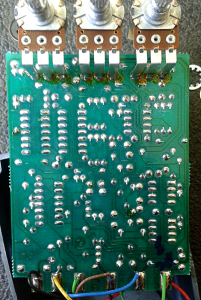 Same aesthetics as for the component side apply to the solder side. Not pretty and there is always this feeling of forced spacing on the board design. Can’t describe it any better than this, but i hope you get my feeling. At least there is some personality in these traces..

What comes to controls, we have our down octave level, tone control and clean level. As the schematic (link above) shows, the level controls determine how much of each signal gets to the output buffer and the tone control affects only the octave side. The topology of the tone control isn’t that far away from the classic one knob tone stack we’ll find in all of the Big Muffs.

How does it sound?
Like a world class analog one octave down divider. Clean level is capable of bringing a bit of boost to our attention while the octave level feels  slightly sluggish. Not that it is sluggish in terms of output, but the lows go low enough to feel like it. Even though it’s just one octave down. What comes to tracking, this is a prime specimen. Divider doesn’t go off the track as badly as many others and it tries its best to keep the divider in control even with two notes ringing at the same time. No, this isn’t polyphonic in any way, but the results are great. The tone control is rather dull and unnecessary. It can take some of the inaudible lows away from the overall sound, but for me, the sweet spot is still where this pot is at minimum level.

Working, good sounding one octave down divider circuit in classic DOD housing. You really can’t go wrong with this one. It may not be the greatest octave down there is, but is still is pretty appealing thing to have.