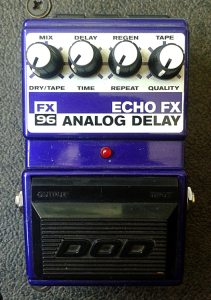 What is it?
DOD FX96 Echo FX Analog Delay from FX series. No serial number, but component stamps suggest the unit is made is USA, 1999. The America’s pedal is once again perfect source for the version details and additional info. So check that out before continuing.

I’ve been partly in love with analog BBD-based delay units for a long time. They all do have their shortcomings and added noises, hisses and relative uncontrollability. While the sole idea of using a small chip with thousands of FETs stacked in such a small device is almost stupid, the sounds these chips are able to keep delayed is something that cannot be achieved in any other measures. Many have tried to model an analog delay in modern digital methods, but as many as there are folks trying it, there are equal amounts of people who have failed in this task. In our modern world, the analog delays are not in the cheap. Mostly due to the fact that manufacturing these chips is expensive and are currently produced in limited numbers. Sure there are a few types that are still in production, but not the ones we really want to see and hear in a effects pedal.

Everything about FX96 looks and feels like every other pedal in the series. Quality through hole components and the touch of hand labour is just glowing with pride. This unit houses the revision B circuit board, which adds a 1M trimpot to the original revision. 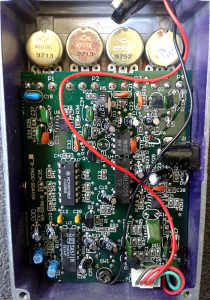 I’m not too interested in the buffer/mixers or even in the SA571 compander (which is used to compress and decompress the signal sent to the delay line and decompress it again afterwards), but the delay line itself. In this model, the bucket brigade device is the almighty MN3005. A 4096-stage BBD and it’s driven by a MN3101 clock driver. In my limited experience with analog delay units, the MN3005 has most definitely been the crown jewel in the list of all BBD chips ever manufactured. Due to its high number of FETs, it can produce up to 800ms of delay time with very reasonable amount of signal distortion (as a side note, the compander is there to eliminate part of the noise and/or distortion produced by the FETs). So long delay times with little distortion. This is the s*it.

The controls are Mix, or Dry/Tape, which sets the output ratio of buffered clean signal and signal processed by the BBD. Delay/Time is used to set the time the signal is stored in the BBD chip before releasing it. This ranges from a few milliseconds to respectable 800 milliseconds. Regen/Repeat sets the amount of signal being passed from the output of the delay line back to its input – resulting in feel of continuous echo. This control ranges from single slap back to infinite “self-oscillating” repeats. I use quotes for “self-oscillating”, since this feature found in most delay effects isn’t exactly an oscillation. And finally the Tape/Quality knob controls the higher treble frequencies that are being passed in the feedback. More cut on the highs and the repeats will die quicker. Not in completely different manner than what we may hear some old tape echo machines to produce. If the high cut is minimal, then the sound will remind us more of a modern digital delay, while still being all analog.

How does it sound?
From rockabilly slapback to super space wars. I said before that this unit is little distortion. This doesn’t mean that there isn’t any, it’s just that the amount of noise/hiss/distortion is at lower level than with some other analog delay units. It isn’t squeeky clean, but the noise floor level on high delay times is just giving it a bit more character, while it doesn’t hurt tone. At least not that much. Very good range in controls, which let you set the the tone to be anything from real vintage sounding to modern. Sure. It does not sound like those pristine modern digital devices, but it sounds very, very good.

If you are after a studio grade noiseless delay, then look elsewhere. But if you are after the tones from the past and beyond, all the way to reality of space, then this unit is for you. I’m nearly in love with it. If i was to sell my collection, this one would be the very last to go. Once i played with this, i was immediately convinced that this is the unit that is a dictionary example of a keeper.