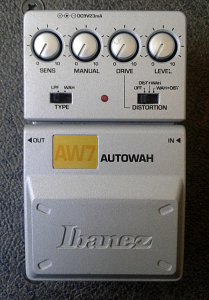 Where Ibanez AW5 from soundtank series left me a little on the cold side by its sound and overall feel, the follower for the Tonelok series does things differently. To begin with, all  the control slots on the enclosure are in use. Two slide switches and four pots. Before checking the features, let’s take a quick look under the hood. 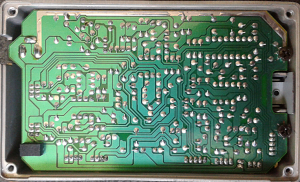 Board looks like all the rest of designs in this series, so no surprises there. There’s a factory schematic up at Ibanez.com. Which shows us that the design is a hybrid with a 13600 OTA envelope filter and a distortion. Slightly over engineered feel to it, but the board isn’t too packed and still looking pretty pleasing with all through hole construction. 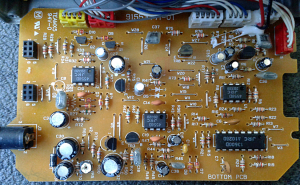 Envelope driver and distortion are powered by those three JRC4558Ds.As usual, the pedal is made with five different circuit boards and those boards are connected by wires on clip terminals. The control board and the main board connect with terminal pins directly. 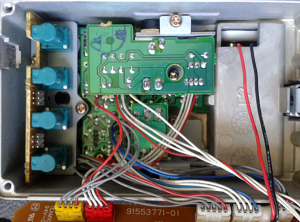 Neat, but nothing too exciting. But then, what comes to features.. Board may not be that packed, but the design is. Feature-wise. The envelope has two modes, wah and LPF (low pass filter). Wah mode takes the envelope to wider frequency range than the LPF, which takes some of the brightest highs away from the sweeps. Sensitivity and manual control the envelope. After those we have our drive control and a switch associated with that. On distortion off, the pedal acts as a basic envelope filter/autowah and disables the drive control. Two other modes of the switch activate the distortion. These modes let you choose the distortion to be in front of the wah or after it. This, in addition to wah/LPF switch gives out a lot of options for the tone.

A noticeable amount of features. In many ways the design and features squeezed in are impressive.

How does it sound?
Light years a part from its predecessor, the AW5. The optical envelope used in AW5 has its advantages, but so does the dual OTA based design on this one. The envelope part is decent sounding, but nowhere near the greatness of nine series classic, the AF9. AW7 doesn’t roll out nearly as much lows from the signal as AW5, but still more than AF9. This tri-comparison may feel a bit much, but bear with me. AF9 is a real milestone that is very hard to beat. On this one, i’m thinking the designer has added more features on modernization of AF9, trying to genuinely make it better. As an envelope filter (or autowah) the AW7 still stays light years away from AF9, but it has the firepower to take the AW5 out at any given minute.

Biggest culprit is the the distortion an the tone it has. Which is ok, but not great or not even particularly good. Slightly on the thin side and slightly boring. One can get decent late 80’s and early 90’s lead tones out of this, but it’s all still a special effect that i’d describe as novelty pedal. To sum it up, this sounds way better than AW5, but still not as good AF9.